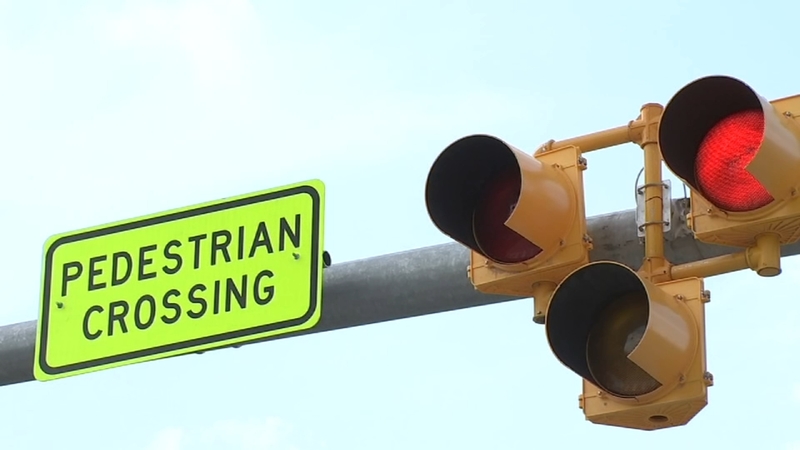 These are Houston's 3 most dangerous intersections

HOUSTON, Texas (KTRK) -- A little more than two months after the deadly accident that claimed the lives of their loved ones, family of 64-year-old Jesus Perez and 55-year-old Lesha Adams held hands as they crossed Shepherd Drive near 10th Street.

The paint on the crosswalk was fresh and a signal light flashed red above them as traffic came to a halt.

"This is a beautiful thing and this is what needed to happen," said Terri Webb, Adams' sister. "If it could've been sooner, we would still have her with us."

RELATED: Mom killed in front of her kids while helping man in wheelchair cross road

On March 30, Adams pulled over and got out of her car to help Perez, who was in a wheelchair, and was trying to get across the road. Both were hit and killed by a car that did not stop after the collision.

Jada Mimms, 20 was identified as the driver and has since been arrested and charged.

Mayor Sylvester Turner, along with Houston Police Chief Art Acevedo, gathered near where the accident happened to unveil a newly installed crosswalk and also to provide updates into their work to make the streets of Houston a safer place for pedestrians.

"I'm announcing the city of Houston will announce Vision Zero, a comprehensive strategy that re-frames the way we think about street safety," the mayor said.

LINK Houston is one of several agencies now working with the City of Houston and HPD as part of Operation Safer Streets.

According to HPD, in 2018, 66 pedestrians and nine bicyclists lost their lives in accidents involving vehicles.

Westheimer and Dairy Ashford, Bellaire and Ranchester, and Fannin and Pierce were identified by LINK Houston as the top three most dangerous intersections for pedestrians. In total, the group has identified 12 intersections across the city that are considered problematic.

"I think it's very important to remember that at some point during our day, we are all pedestrians," said Ines Sigel of LINK Houston.

Factors in the ranking include poor signage, not enough time to cross the street and fading paint on crosswalks.

Sigel says the city has implemented short term recommendations for improvements at the 12 identified intersections.

Back in April, the mayor made a plea for the public to call 311 and report pedestrian dangers to the city for improvements.

Since that time, 677 calls for service have been received and the majority were from district C, which includes Montrose, the Heights and Meyerland.

The goal of the initiative is to reduce or eliminate traffic deaths and serious injuries in Houston by 2030.