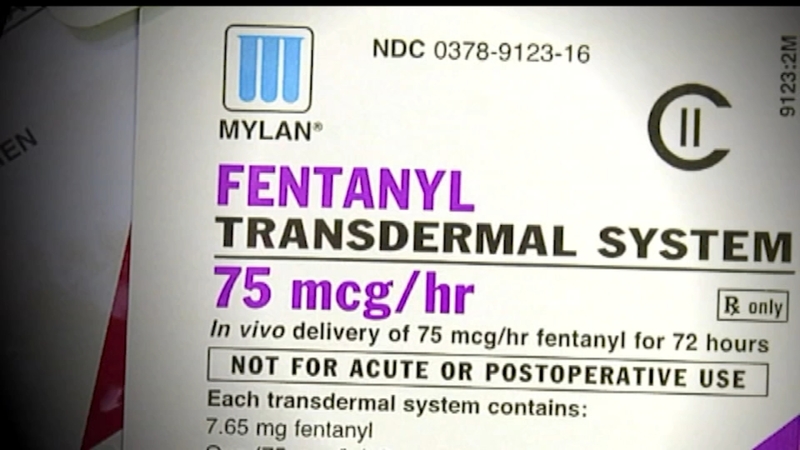 'One Pill Can Kill' campaign aims to bring awareness to Fentanyl

HOUSTON, Texas (KTRK) -- Law enforcement agencies and their partners across the region are working together to bring awareness to the severity of a drug problem surrounding fentanyl in the Houston area.

Members of the Drug Enforcement Administration (DEA), High-intensity Drug Trafficking Area program (HIDTA), Houston Police Department, Council on Recovery and the Texas Department of Public Safety (DPS) joined a fentanyl overdose victim to bring awareness to what they call an epidemic in America.

The group stood shoulder-to-shoulder during a news conference on Thursday to talk about the seizures of deadly fake fentanyl pills, the devastating impact of fake fentanyl pills, an overdose live mapping system and new highway fentanyl awareness billboards. They said these are ongoing efforts to combat the fentanyl overdose crisis in Harris and surrounding areas.

"(In 2021), we had 466 deaths at the hands of fentanyl, and this is a dramatic increase over what they have seen in the past," said Paul Fortenberry, the assistant district attorney division chief for major narcotics in Harris County. " A packet of Sweet'n Low has 1,000 milligrams. If you divide that Sweet'n Low packet by 1,000 pieces, and you get two of those, that's what will kill you. One will make you high, one milligram. Two or three milligrams kill you. The threshold of death is very thin."

Law enforcement agencies across the region, along with the HIDTA, are working together to bring awareness to the devastating impacts fentanyl pills have in our community.

Taylor said fentanyl is an indiscriminate killer, which is coming into Texas at an alarming rate as dealers use it to counterfeit pills. The pills contain toxic levels, and are killing Texans.

"Texas DPS has troopers seizing the substances roadside. Special agents are conducting long-term investigations. Many of those are assigned to HIDTA task forces, and they've seized large amounts of fentanyl, and also the pill pressers that dealers are using to make the pills here locally," Taylor said. "Drug dealers who kill users by putting lethal doses of fentanyl in counterfeit pills and sell them to unsuspecting buyers should know DPS special agents, our partners here, are conducting investigations beyond roadside stops and beyond seizures to put these individuals in jail and bring them to justice."

Chanslor said she was 13 years old when she started using fentanyl to self-medicate for a mental illness she was suffering through.

"By the age of 15, I was performing CPR on one of my very close friends, who ended up not making it, which lead me into picking back up into my active addiction with opiates," she said.

She says over the span of seven years, she has overdosed and was hospitalized 14 times. She was revived, in some instances, by Narcan nasal spray, which is a prescription medicine used for the treatment of known or suspected opioid overdose emergencies. Chanslor said her mother, Colleen Fitzpatrick, even had to perform CPR on her multiple times.

"This is an epidemic in our nation, and we need to educate and communicate with our families, with our children, with the people that we work with, people in school, wherever. It's not going away. It's just getting worse and worse," Fitzpatrick said. " I just want to say that my journey with (Chanslor) emotionally is sleepless nights, dreading that phone call and having to perform CPR on her to make sure that she survives until the EMS gets there to administer the Narcan, which I carry Narcan in my purse."

"She decided to get behind the wheel of a vehicle, and was in a horrific accident. I got a phone call at 3:30 a.m.," she said.

Law enforcement agencies from across the region stood together on Thursday, vowing to work to fight the fentanyl epidemic by launching the, "One pill can kill" campaign.

Daniel Comeaux with the Houston DEA says, so far this year, the city is reaching record numbers.

"Right now, we have a 45% increase already, not even midway through the year, already a 45% increase in fentanyl we are taking off the street. That's way too much," Comeaux said.

HIDTA has also launched a billboard campaign, putting faces to the deadly consequences of the addictive drug.

The billboards have been placed in eight locations so far in the Houston area. The ads are also a way of connecting parents to resources to help them keep their children safe.

"So to teenagers out there, to middle schoolers, to high schoolers, to college kids, you must know that the pills that you buy on the streets and that you get from your friends often times contain fentanyl," says Fortenberry. "It may look like Xanax, but there's a very good chance that you are playing Russian roulette when you take that pill. The only pill that someone should put in their body is one that comes from a pharmacy, because that's the only way that we know that pill is safe."

Law enforcement are emphasizing the need for parents to talk to their children about the dangers of fentanyl and how it only takes "one pill to kill."

Fitzpatrick is using her family's story to help others who are struggling with addiction. "Because of (Chanslor's) addiction, I am now on the leadership committee for the behavioral health and suicide prevention of Montgomery County," she said.

Chanslor says she's a survivor, and for the last seven months she has been on the road to recovery. It's a process she says she's taking day by day.