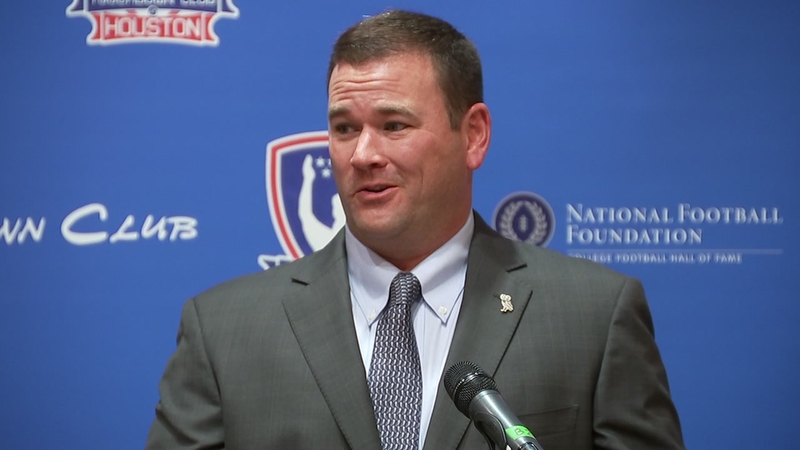 What to expect from Bayou Bucket 2018

HOUSTON, Texas (KTRK) -- The battle for Houston kicks off this week with the Houston Cougars battling the Rice Owls in the 42nd Bayou Bucket.

Here's everything you need to know as the two schools face off for the Bucket.

PREVIOUS MEETING
The two schools faced off last season in the third week of the season, with the Cougars thrashing the Owls by a final score of 38-3 in front of almost 40,000 fans at TDECU Stadium.

RECORD LAST SEASON
The Houston Cougars struggled last season under first year head coach Major Applewhite, finishing with a record of 7-5. Their record was good enough to earn them a bid to the Hawaii Bowl, where they fell to Fresno State, 33-27.

Meanwhile for the Rice Owls, last season was definitely one to forget. They went 1-11 on the season en route to their worst since 2005. Rice eventually fired head coach David Bailiff who had signed a 5-year contract extension after the 2013 season.

OFFENSIVE PLAYERS TO WATCH
Rice: New head coach Mike Bloomgren knows one of the easiest ways to victory is to control the clock and dominate the ball, which was evident in Rice's victory last week versus Prairie View A&M. The Owls held on to the ball for nearly 40 minutes, thanks in part to junior running back Emmanuel Esupka, who finished with 173 yards on 32 carries.

Houston: After revamping parts of their offensive coaching staff, the Cougars look to return to their explosive ways. While the hiring of offensive coordinator Kendal Briles was mired in controversy, quarterbacks thrive under Briles' system. Now dual threat quarterback D'Eriq King looks to soar to new heights under the Cougars new high octane offense.

Rice: Armed with their new ball control offense, Rice coaches hope it limits how much the defense hits the field, led by sixth year pass rusher and graduate student, Graysen Schantz. The 23-year-old Schantz was granted an extra year of eligibility due to medical hardship last season, but still managed to rack up 19 tackles and 1.5 sacks in just six games.

Houston: All eyes will be on junior pass rusher Ed Oliver, who has the potential to be the top overall pick in next year's NFL Draft. While Oliver is known for being a menace on defense, there have been signs that Coach Applewhite may use the 6-foot-3 Oliver on offense as well.