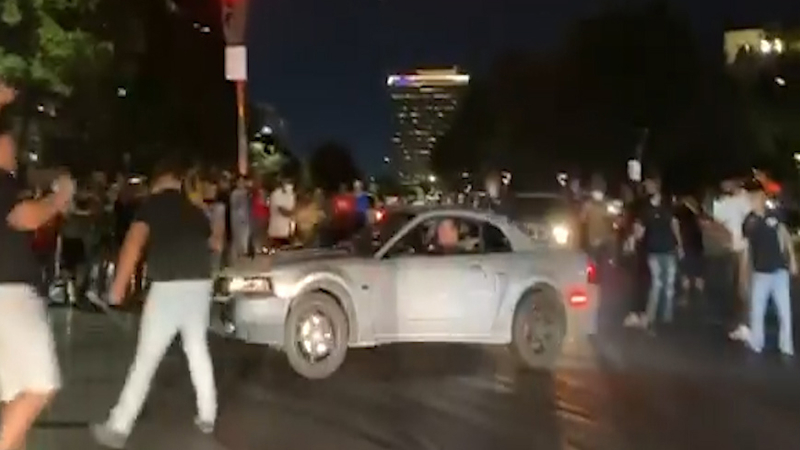 HOUSTON, Texas (KTRK) -- It was another wild night on Houston roads as a crowd took over a Galleria-area intersection to perform car stunts.

At the intersection of Westheimer and Sage, cars and people were seen blocking the street as burn-outs were performed by drivers.

While some did burn-outs, other drivers did donuts, and at least one person set off fireworks.

Video captured by @speedhouston shows the driver of a Ford Mustang doing donuts overnight in Houston intersection full of people.

The practice is far from new in the Houston area.

A similar series of incidents happened in the same location in May 2020 as residents nearby caught the action on camera.

"I'm just like, 'Everyone else going crazy in quarantine,' so I thought I was hearing things when I went outside. I was shook!" witness Rich Lux said at the time. "This is not social distancing, what I saw last night."

Incidents, including one in 2019, have raised safety concerns with authorities including Houston police.
SEE ALSO: 'Car meet' takes over streets near Galleria with wild stunts and fireworks

HPD has asked for the public to call in tips anonymously in the past about activity like the overnight stunts. There was no word if any arrests were made.

In another incident overnight, as many as 20 all-terrain vehicles and dirt bikes were seen traveling the wrong way on roads near Memorial Park. A 14-year-old was injured when they ran into a Houston police cruiser during a pursuit, police said.

The teen was taken to the hospital, but the extent of their injuries wasn't known.

It wasn't clear if the two incidents were related.

While it's not clear if these riders were involved in an overnight police chase, this group was seen flooding one Houston neighborhood.

"I'm just like everyone else going crazy in quarantine so I thought I was hearing things. When I went outside I was shook!"

Crime Stoppers may pay a cash reward for information leading to the identification, charging and/or arrest of suspects in this case. Information may be reported by calling 713-222-TIPS (8477), submitted online at www.crime-stoppers.org or through the Crime Stoppers mobile app. Only tips and calls directly to Crime Stoppers are anonymous and eligible for a cash reward.