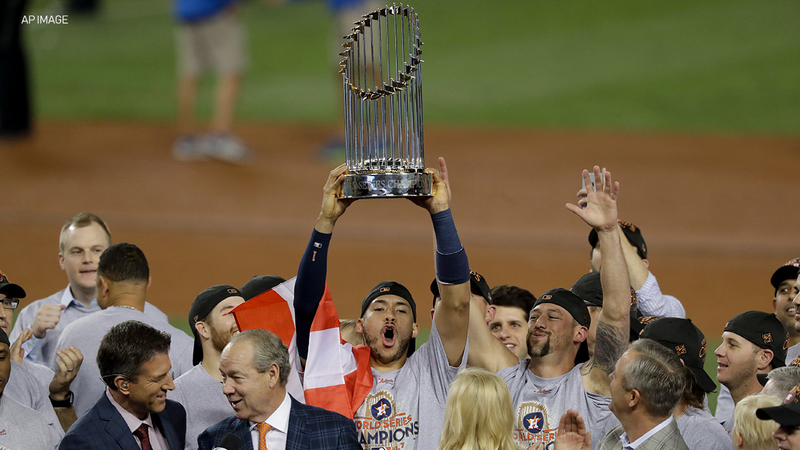 In his first public interview since announcing historic penalties for the Astros last week, Manfred told Fox Business Network that MLB will honor the "long tradition in baseball of not trying to change what happened."

"I think the answer from our perspective is to be transparent about what the investigation showed, and let our fans make their own decision about what happened," Manfred said Wednesday.

Manfred's comments came one day after the Los Angeles City Council unanimously approved a resolution urging MLB to strip championships from the 2017 Astros and 2018 Red Sox and award them to the Los Angeles Dodgers.

Manfred and MLB confirmed on Jan. 13 that the Astros illicitly used technology to steal opponents' signs throughout the 2017 regular season and postseason. The penalties included season-long suspensions for general manager Jeff Luhnow and manager AJ Hinch, the forfeiture of four draft picks within the first two rounds and a $5 million fine.

"We haven't concluded our investigation with the Red Sox," Manfred said. "So it's a little hard to take the trophy away from somebody who hasn't yet been found to do something wrong. We don't know what the outcome of that's going to be."

The Dodgers lost to both the 2017 Astros and the 2018 Red Sox in the Fall Classic, but Manfred said that regardless of the sign stealing, it is "absolutely unclear that the Dodgers would have been the World Series champion."

Manfred also noted that Luhnow, Hinch, former Red Sox manager Alex Cora and former Mets manager Carlos Beltran all have "lost their jobs over this" and emphasized that last week's penalties "will serve as a deterrent for this behavior going forward."