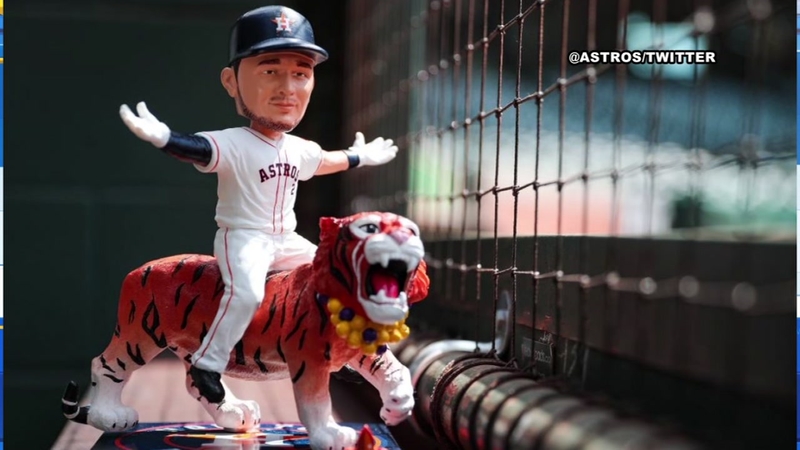 Astros fans line up early to get Alex Bregman bobblehead

HOUSTON, Texas (KTRK) -- Fans of the Houston Astros can definitely say the team is a product worth spending money on.

The team is, after all, the defending World Series champs and in prime position to make a run for a second straight title.

The on-field product has generally been strong, so that kind of strength is being recognized in their special edition bobblehead releases.

Each month since May, the team has dropped a bobblehead for sale, and each piece is epic. In May, George Springer poses with the World Series trophy. In June, bearded teammates Brian McCann and Evan Gattis do their best "Step Brothers" tribute. Last month, life of the party Josh Reddick proudly wears American flag trunks and his championship belt, while posing with a bald eagle.

For August, the Astros turned up the volume on epic with Alex Bregman mounting a Bengal tiger, which is a nod to his time at LSU.

Fans were informed of the bobblehead release a week in advance, with the design kept in secret. Once Bregman was revealed Wednesday night, Astros fans clamored for the coveted piece.

The August Bobblehead of the Month: Alex Bregman!

Wristbands will be passed out at 12am tonight at the #Astros Team Store. Those with wristbands must stay in line to purchase – leaving the line or removing your wristband forfeits your right to purchase. One bobblehead per person pic.twitter.com/4ZlwDc5NZA

One fan, David Arriasola, said he got in line at Minute Maid Park beginning at 9 a.m. Wednesday.

The way it works is fans in line were given wristbands starting at midnight, giving them the right to purchase the bobblehead. Those who had the wristbands were able to make the purchase at 9 a.m. Thursday when the team store opened.

Once a fan got a wristband, that person had to stay in line. Leaving the line or removing a wristband forfeited your right to purchase. And, bobbleheads are limited to one per person.

Last month, the Astros sold only 150 Reddick bobbleheads. Some fans also sold the piece for as much as $500 on auction sites.

RELATED: SOLD OUT! Astros fans wait hours to get their hands on a Josh Reddick bobblehead
EMBED More News Videos

Eyewitness Sports reporter David Nuno explains the goodwill of Josh Reddick and how he is being embraced by Astros fans.