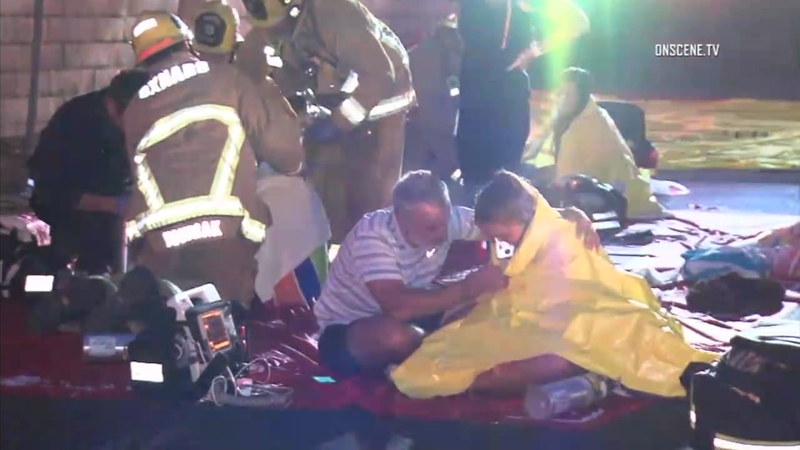 THOUSAND OAKS, California -- Nineteen people were treated and hospitalized after being exposed to a pool chemical at a Thousand Oaks swim club Wednesday evening, officials said.

The incident occurred at Daland Swim School in the 100 block of East Wilbur Road around 6:30 p.m.

Swim instructors said it all happened in a matter of seconds during a routine swim practice. The children in the pool started coughing and some complained they couldn't breathe.

"That's never happened here before, so for us it was quite a scary moment," facility owner Leslie Darland-James said.

Children were immediately taken out of the water and rushed out of the facility. Darland-James said it appeared that there was an issue with one of the pool pumps.

"There were bubbles that came up into the lap pool and we suspect that it was chlorine gas," she said.

As many as 20 ambulances arrived at the scene to transport patients as the area was evacuated. A triage area was set up, and the Ventura County Fire Department said there was a total of 19 patients.

"The pool chemicals that are most commonly used are chlorine and some type of acid - muriatic acid, most commonly. There was a slight smell of bleach in the facility as the students were exiting," Capt. Steve Ziegler said.

Darland-James said the pool pumps were inspected and she was told that it's not uncommon for there to be a "slight surge" of chlorine to come through the line.

The facility has a retractable roof, which was open at the time. It allowed for the gas to dissipate quickly.

Officials said every swim instructor is Red Cross certified and followed a plan to keep the kids safe.

"They were very quick to respond...which was actually exciting for us. They knew exactly what to do and they kept calm and collected and got our kids to safety. They calmed their fears and that's really what they were managing more than anything else was the hysteria of something like that happening," said Tarrik Daou, general manager of the swim school.