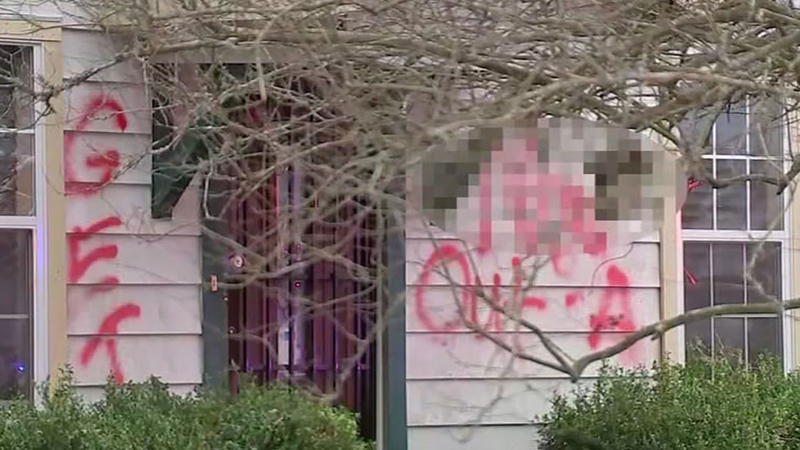 HIGHLANDS, TX (KTRK) -- A hate crime investigation is underway after someone spray painted racial slurs on the house of black man and then set his car on fire.

Spray painted repeatedly in big red letters is the N-Word. The racial epithet could seen scrawled on the white, one-story house and the silver vehicle over and over again.

The damage was done while people slept early Friday morning. A truck was torched in the driveway of a home.

The homeowner, who asked not to be identified, was awakened by the sound of firefighters.

"I thought I was actually watching a horror movie when I looked out the window and saw all those cars and flashing lights," he said.

He bought the home in Highlands two years ago, repaired it and moved in eight months ago. He tells Eyewitness News that someone drove by the house back in 2014, screaming the N-word and telling him to get out. He is bi-racial and grew up in the area. He said he doesn't know why it happened.

"Was I targeted? People just don't want me here or trying to send a message or what," he said.

The man lives with his three children and two stepchildren, ages 18 months to 13 years old.

Cars drove by the house. People wanted to see what happened for themselves.

"That's not cool. People need help when they do that kind of stuff," resident David Regian said.

Other people offered help and encouragement.

"This is not representative of who we are as a community," said First Baptist Church Pastor Tim Edwards.

N-word painted on house in the Highlands, car torched

Letter by letter, the words were removed from the house by Highlands firefighters, and the burned truck was towed from the driveway.

The Harris County Fire Marshal is asking the FBI to investigate the case as a possible hate crime. Meanwhile, the homeowner says he isn't going anywhere. What happened hurts, but not as much as having to explain it to his children who visit him.

"It makes no sense to go around and do these type of things because of who they are or what color they are," he said. Now he's moving into the new year with uncertainty about who did this.

His message to the person or persons who did this was to "get a life" and to "move on."