KTRK
By Ted Oberg and Sarah Rafique
HOUSTON, Texas (KTRK) -- After his COVID-19 test came back positive in mid-March, Troy Chandler said he expected calls from contact tracers asking about who he had been around during the days leading up to his diagnosis.

"[They] asked just a ton of questions about who I was around and exposed to," Chandler told 13 Investigates' Ted Oberg. "The day I went to the ER the first time and they said, 'You're fine, you don't have it. You probably just have an infection.' I went to work the next day and again sat in the conference room with about three or four folks."

Chandler, who lives in Houston, called his colleagues personally to let them know of his test results, but also gave their information to the contact tracers. Thankfully, none of them got the virus.

But, that was in March.

Now, more than four months after the pandemic reached Texas, there are nearly 21,500 active COVID-19 cases in Houston alone, and not enough manpower and resources to reach out to everyone.

So far, the city of Houston has spent $1.7 million of the $26.2 million in funds it set aside from the federal Coronavirus Aid, Relief, and Economic Security (CARES) Act for contact tracing.

But, 13 Investigates found thousands of Houston cases are being tossed out due to delays in testing results, which make contact tracing less effective. Hundreds more are ignored due to a lack of staff.

"Are we where we need to be today? No. But I do think there has been support to help us get there as quickly as we can," Marlene McNeese, an assistant director at the Houston Health Department, told 13 Investigates.

The goal is to ask people who have tested positive who they were in contact with and then reach out to those individuals. The city's goal is just two people contacted per positive case, but records show the average is 0.35 contacts per case, and it's falling.

"You may have one person with an active case who may name 20 people that they may have been in contact with and then we'll have another 10 folks who won't give us any names of people they've been in contact with," McNeese said. "That's why the average of two is what we hope for and even now, as you can see, we're still struggling with that." 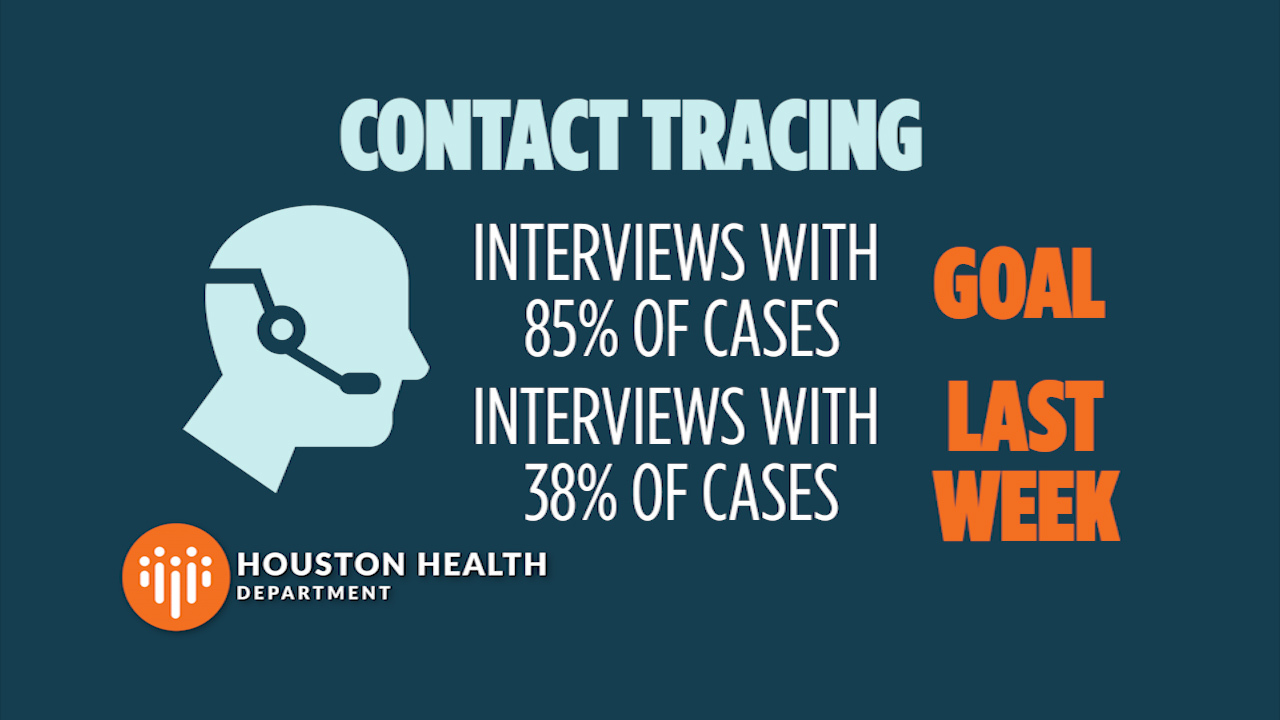 Inside the George R. Brown Convention Center, contact tracers sit 6-feet apart, wearing masks and making phone calls. With hundreds of new city employees designated to work for the program, it's proven hard to make sure they have what they need.

McNeese said the city is having to procure hundreds of pieces of equipment. Two months into the program, city documents reveal health officials are pleading week after week for basic equipment, including laptops, keyboards, mice and headsets.

"The volume has just been so overwhelming," McNeese said. "It's taken quite a bit of work and build of expanding our infrastructure to try to respond to it." 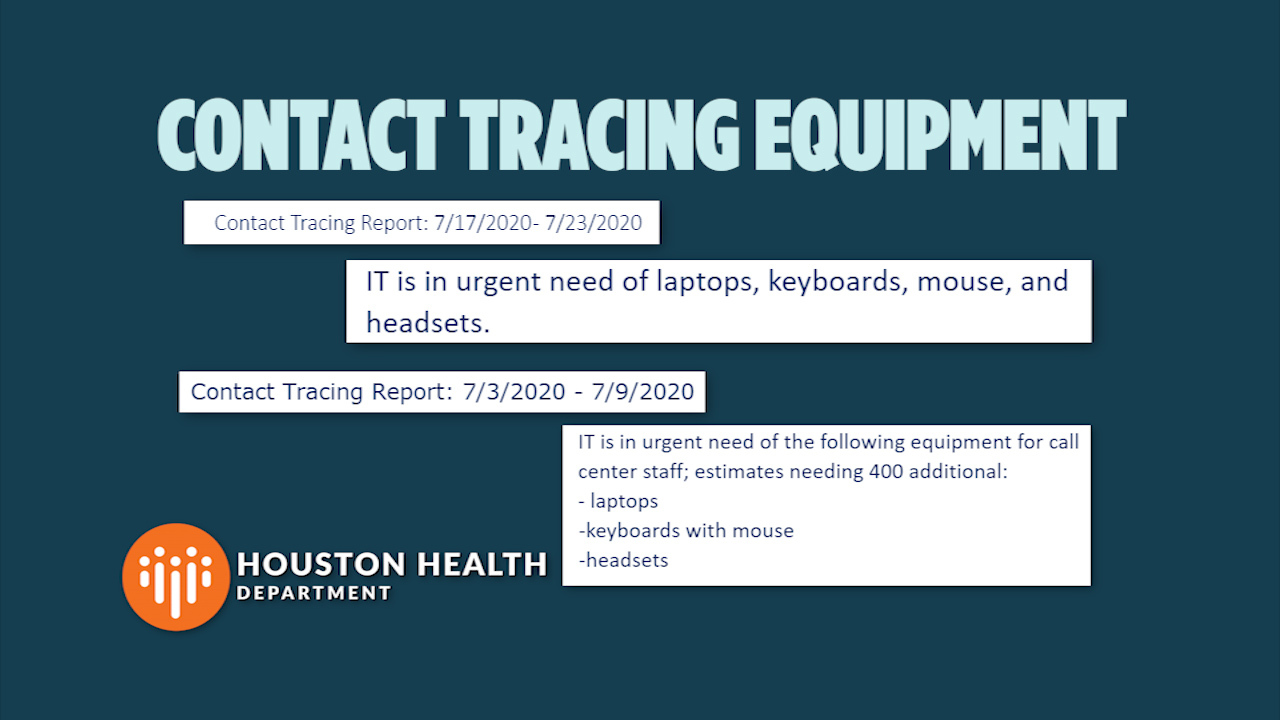 The city is slated to hire 300 contact tracing positions. More bilingual contact tracers are still needed and only 232 of the available positions were filed as of July 15.

"The hiring goal of 50 staff per week has never been met," according to a city report for the week of July 9-15.

After he was diagnosed, Chandler said contact tracers called him at least twice to double check that he gave them the names and numbers of every person he was around leading up to his illness. He also got calls from the city or county asking if his status was improving. Now, he said he doesn't know how the city can keep up with the increase in cases.

"I know it's going to take an army of people because we have so many more people diagnosed now and I can't imagine the logistics," Chandler said. "I really can't."

The city program is also handicapped by a testing system that is failing contact tracers as often as it fails patients.

"The delay in reporting really makes it very hard for us to do an effective job and it's not just hard for us, it's hard for people who have gone out to get tested and they're waiting for those test results," said Dr. Kirstin Short, chief epidemiologist for the Houston Health Department.

McNeese said the expectation is for tests conducted by labs in Houston to yield results within 48 hours. But, it takes an average of 10 days to receive a lab report from labs outside the city which are handling most tests here. After that time frame, contact tracing isn't as effective at preventing the spread.

She said the goal is to intervene as early as possible after someone tests positive to make sure the city can identify and inform anyone the patient was in contact with so they can also get tested and possibly quarantine or self-isolate.

"When you talk about beyond 10 days, by the time we get a report to the time it may take our system to connect with you, another 24 to 48 hours after that, we're just getting further beyond the window of where real contact tracing intervention will make a difference," McNeese said. "That's what we know is the case, unfortunately, with these lab delays for these tests results."

The COVID-19 test samples sent to national labs are the ones experiencing the longest delays, according to the city.

On July 14, both Quest Diagnostics and LabCorp, which handle COVID-19 testing across the nation, told ABC13 an increase in testing created a backlog, causing wait times of a week, or longer.

Those delays have caused the city to fail to contact some positive patients. 13 Investigates' review of city reports shows 36% of cases within the last two weeks weren't traced at all because the results were too old. 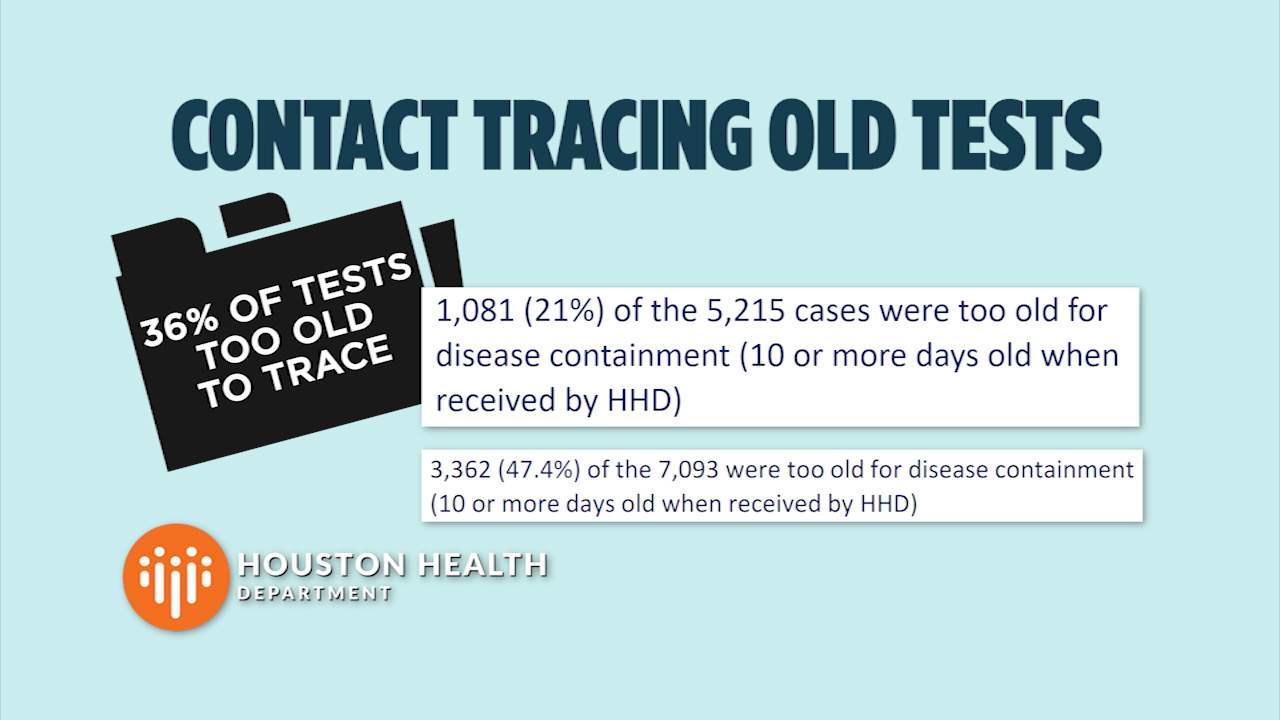 Last week, for example, McNeese said there were more than 5,000 cases reported, and the city was able to start following up on 68% of them. But, she said, that meant more than 30% of cases could not be investigated properly because the test results were not timely.

In mid-July, 53% of all cases were tossed due to lack of staff and slow test results.

RELATED: Delays in COVID-19 testing results become 'dangerous' for some

The city's goal is complete interviews with 85% of cases they get, but some cases also aren't followed up on due to staff shortages.

"Even if we can't [reach] them in time for what we think contact tracing would make the most difference, we do want to make sure that we have some awareness about those cases," McNeese said. 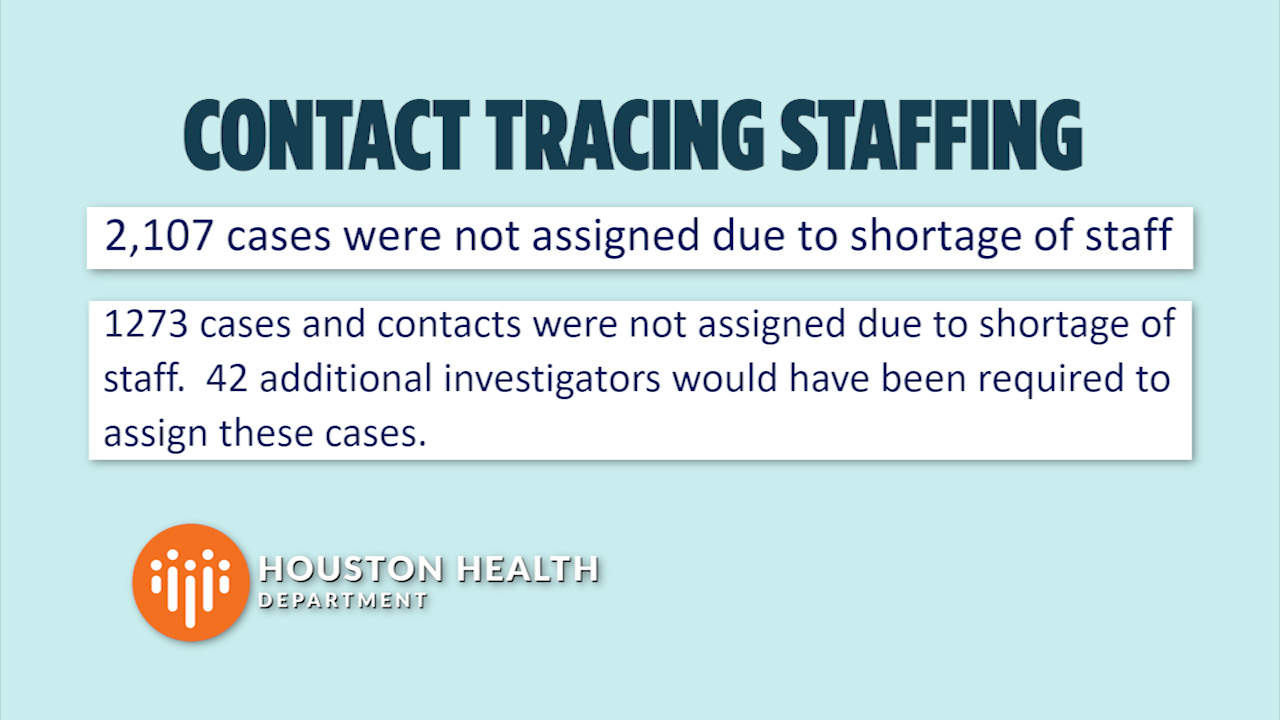 Despite the setbacks, McNeese said contact tracing, along with social distancing and mask-related messaging, all work together in helping fight the spread of the virus.

At least 44 locations, mostly apartment buildings, reported 10 or more positive cases at one time, according to a city report from earlier this month. And identifying targeted communities or zip codes with a high number of cases allows the city to deploy resources on prevention and help prevent further transmission, McNeese said.

"It's still an essential tool because it is one of the tools that we use that can actually provide one-on-one touch and information to people who most need," McNeese said.

Short said some cases are more straightforward, where the patient only interacted with one or two people, and others are more time consuming if the person was in larger settings.

It also depends on how willing people are to participate in the program.

"There's a lot of folks that say, 'why are you calling me? How did you get my number?" Short said. "So there's time spent establishing that relationship and that trust and then there are other folks that are saying, 'Oh, yes, I was expecting someone to call me and they're ready to go."

McNeese tells us the city should be up to full staff within a few weeks, but convincing Houstonians to cooperate with tracers will remain a challenge.

"We do need people to say who they were in contact with," McNeese said. "It's not about pointing fingers, you know, who may have transmitted to whom. It really is about making sure you as the individual have what you need and you can help us make sure the people you've been around, possibly your loved ones, also have what they need."

McNeese said whenever a contact tracer reaches out, they will let you know they are from the Houston Health department and the Caller ID should say "Houston Health" or 713-853-8700.

Text messages from the health department will come from one of these three numbers: 35134, 73940 or 39242. Emails will come from houstonhealthdepartment@qualtrics-survey.com.

If you receive a call, text or email regarding contact tracing and you are unsure if it's legitimate, you can call the Houston Health Department COVID-19 Call Center at 832-393-4220. 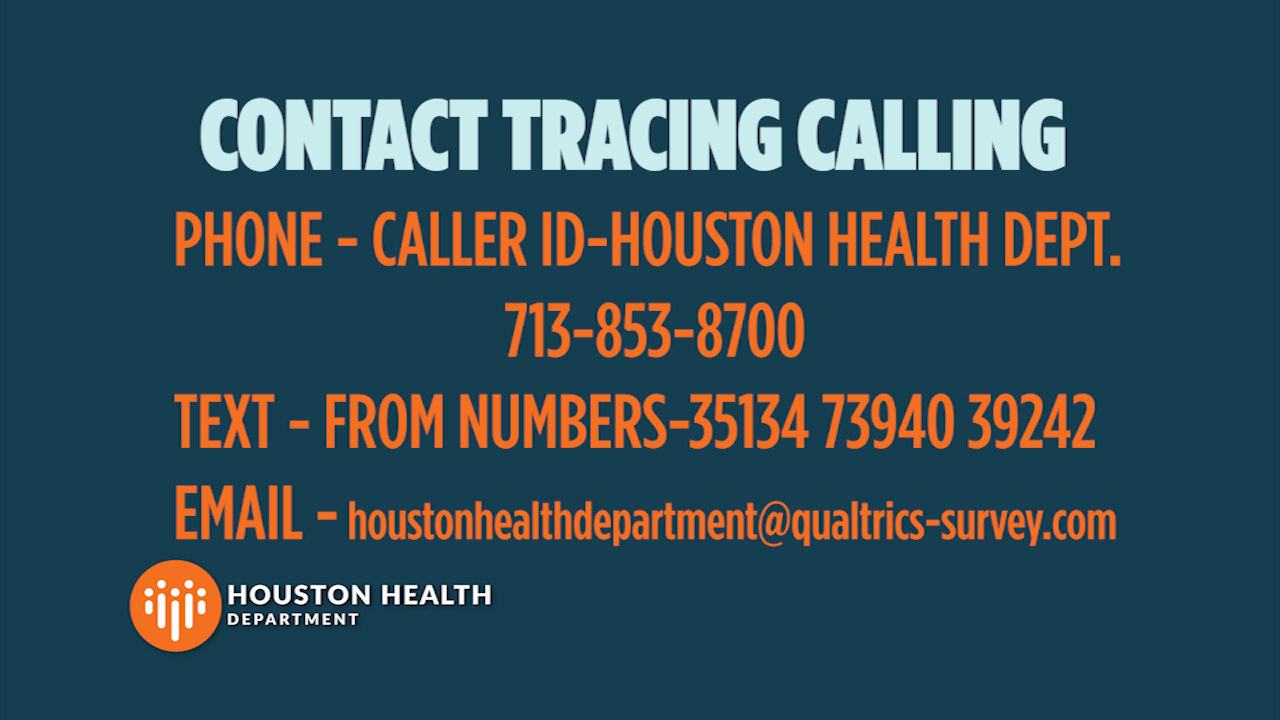 RELATED: How fake contact tracers are getting away with your info

Chandler thinks he got sick after flying to Dallas on Feb. 29 for a work trip. About 12 days later, he started feeling sick and went to an emergency room with a mild fever and cough.

He wasn't in what was considered one of the high risk categories at the time, hadn't traveled overseas and wasn't exposed to someone who tested positive. Because of that, he said he couldn't immediately get a test. Even though he tested negative for the flu, he said he was told it was probably allergies, given antibiotics and sent home.

"A week later I was much, much worse and called my own doctor and said, 'I got to get in to get a test and see somebody,' so he arranged for me to get it to the ER and see the right people and get a test," Chandler said. "Terrible, terrible fatigue to the point where I literally couldn't walk from my bathroom to the bedroom, a fever, shortness of breath, debilitating, shortness of breath, body aches, you know, all this stuff you've heard of, I had it all."

He's doing better now, and says he feels like he has 90% of his health back to where it was pre-COVID-19. Still, he doesn't want anyone else to go through what he did, and that's why he said it's important to share the names of people you were in contact with if you test positive.

"I don't know why you would be reluctant to give the name and number of somebody whose health is at stake and you could help," Chandler said. "If somebody exposed me to something, I'd sure want them to give my name and number to somebody who was going to make sure I was okay and informed so I didn't have any problem giving them the name of the number. It was in the best interest of them and everybody who they might be exposed to."

Have a tip for Ted Oberg? A problem to solve? Get in touch with us on our tip page, or send a tip below. (On mobile? You can open our form by tapping here.)
Related topics:
health & fitnesshoustonted oberg investigatescoronavirus testingcoronavirus helpcoronaviruscoronavirus texascovid 19 pandemiccovid 19 outbreakcovid 19
Copyright © 2020 KTRK-TV. All Rights Reserved.
TED OBERG INVESTIGATES 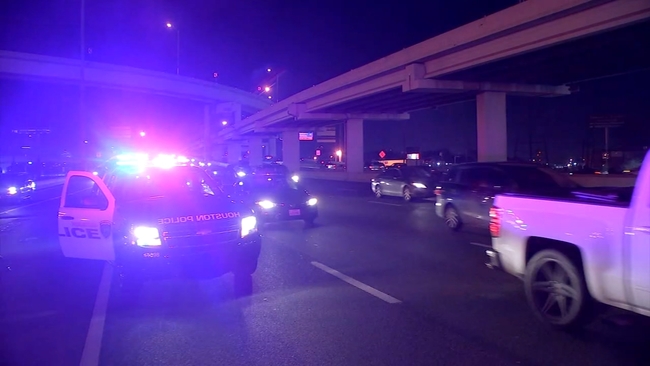