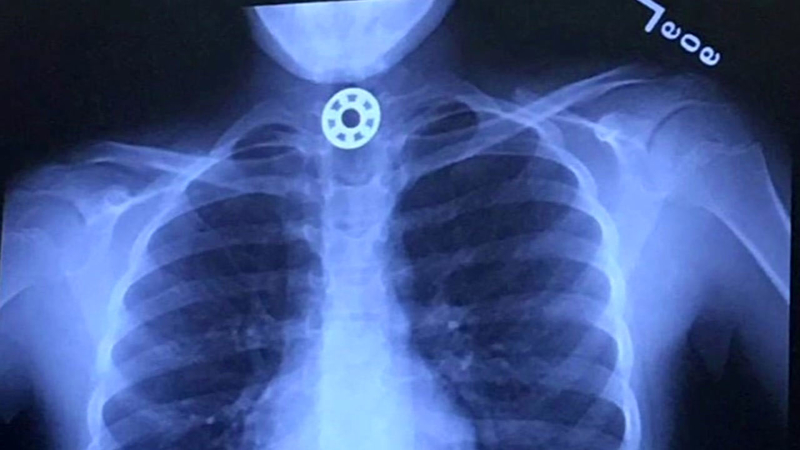 Kids everywhere are using the fidget spinner, but now it's being investigated following safety concerns.

These hot toys are being investigated by the Consumer Product Safety Commission.

Nancy Cowles, Executive Director of Kids in Danger, explained, "Our concern about the spinner toys is they seem to be falling apart. Young children have had incidents where they've had to have surgery to remove them."

Two separate cases are causing big concern -- one in Houston where a mom posted an x-ray after her 10-year-old daughter swallowed a piece of the fidget spinner. The girl had surgery to have it removed.

The other case is in Oregon where Johely Morelos showed her son Cayden the picture of the Texas incident as a warning, but the 5-year-old still ended up swallowing a part of the toy and had to be rushed to the hospital.

"If I would have known that the toy came apart I would have never let him get a hold of it," Morelos said. "It was terrifying and was heartbreaking to see my child choking up blood. I would never want another parent to go through what I did."

Cayden's uncle bought him the toy as a gift on Amazon. The fidget spinners are made by multiple manufacturers -- many in China.

"Any toy sold in the United States has to meet our toy standard," Cowles said. "It's very hard to track down the manufacturers of these products."

Some of the fidget spinners are packaged with a choking hazard warning for children under three years of age. However, in the Texas and Oregon cases, a 5-year-old and a 10-year-old managed to swallow a piece of the toy.

ABCNews reached out to Amazon for comment and did not hear back. Many schools are banning these toys because teachers find them distracting in the classrooms.