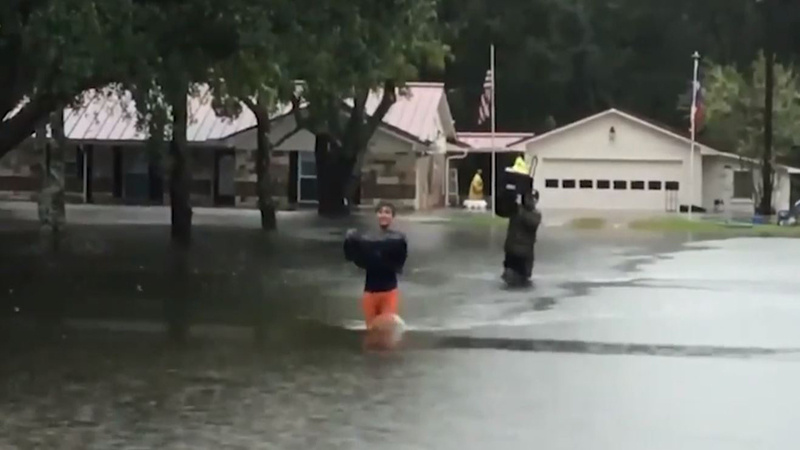 Some people getting around Kingwood neighborhood in kayaks

KINGWOOD, Texas (KTRK) -- Sharai Poteet put on her life jacket and walked outside. Several feet of water was already covering her yard.

Her chickens are floating in her boat because their coup is underwater. For more than an hour, she was forced to swim back and forth to her house to load up her belongings.

She also has seven dogs to rescue before she leaves for the night to stay at her daughter's home.

"I'm not panicked," Poteet said. "I'm just disgusted. I'm tired of it. I don't understand why we don't have any drainage out here anymore."

Although the inside of her home isn't flooded this time, three rooms inside another family home did. She's had enough.

After Hurricane Harvey devastated her home in August 2017, Poteet said she spent more than $50,000 on repairs.

13 Investigates profiled her story earlier this year in June, when the city said only four Harvey victims had received aid from a $1.2 billion federal Harvey disaster housing recovery program meant to reimburse storm victims like her. To date, there's still thousands of Harvey flood victims waiting for aid from the city.

And, after more than two years of waiting, Poteet said she finally received a call from the city saying someone would come visit her home this week as they review her application.

"I guess they aren't coming today," she said. "Two years. Two years since Harvey and they haven't paid out yet. I think it's just time to go. There's no hope."

Several Bayou's were at or above flood level and emergency call centers were inundated with calls from stranded motorists.

"I'm not panicked. I'm just disgusted," Poteet said. "I'm tired of it. I don't understand why we don't have any drainage out here anymore."

At least with Harvey, Poteet said they had some time to prepare. But Tropical Storm Imelda's rainfall came down too quickly and every time it rains nonstop, Poteet said the risk of flooding gets worse.

13 Investigates' Ted Oberg was waist-deep in water Thursday afternoon as he reported from Poteet's neighborhood in Kingwood.

The entire area was underwater when Harvey hit. One woman Oberg spoke with Thursday said she doesn't have the energy to deal with another flood.

"Its's pretty deep. I got three, almost four feet. It keeps coming up," the woman said. "I managed to get my couches and everything elevated, but my floors buckled so it kind of made everything just tumble over."

Throughout the afternoon, the woman sat in a blue kayak and made several trips up and down the flooded roadway, trying to convince her parents to move to a safer location.

"They don't want to leave their home again because of Harvey," she said.

But for Poteet, she doesn't know if she wants to stay and rebuild again. She said she has no faith in the city helping her.