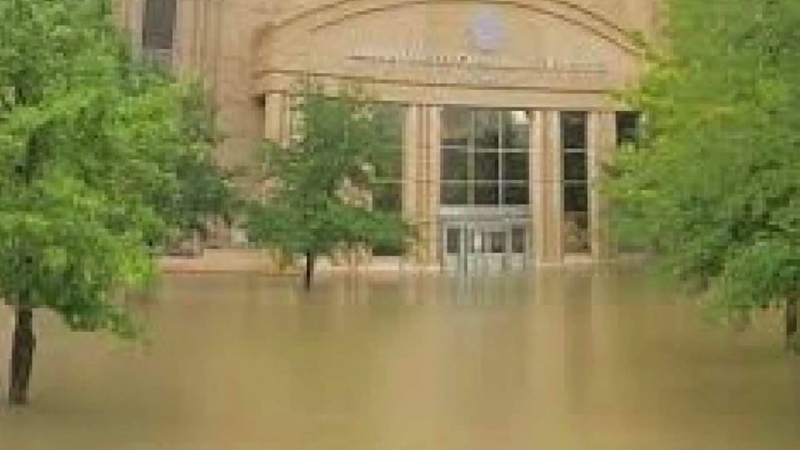 The 20-story building was flooded when the storm hit. Further damage occurred on higher floors when the plumbing system ruptured.

Following the events of Hurricane Harvey, the courthouse closed, but only recently re-opened for jail dockets, and its closure has had a wide-ranging impact on both the criminal and civil court system.

In a recently completed county report obtained exclusively by Eyewitness News, architects and engineers detail the failures as they happened. It also suggests the costs to fix the problems, mitigate future flooding, and upgrade elevators and other logistic conveniences. That cost, to taxpayers, is $86 million, $24 million of that is for repairs and mitigation.

County Judge Ed Emmett feels confident that federal tax dollars, through FEMA, will cover the repairs and mitigation. The rest is county tax dollars and is unaffiliated with the county's proposed billion-dollar flood prevention bond on the ballot this fall.

Judge Emmett said the upgrades to the building have been wanted for years, and the repairs needed from Harvey damage are giving them time to make the improvements while the courthouse is closed.

"The flood," said Judge Emmett. "We wished it hadn't happened. But at least it gives us the opportunity to go back and correct those things."

The Judge believes there was nothing that could have prevented the damage to the building during the storm. But this was not the first time the building flooded since it took on water during Tropical Storm Allison in 2001. The county report reveals that floodgates had bad seals and had deteriorated when Harvey hit.

The work on the courthouse will happen in four phases, according to a separate document presented at a recent meeting during which the criminal courthouse was the focus. The last phase, modernizing the existing elevators, will be finished around April 2020.

In the meantime, the closure of the courthouse has burdened county departments, attorneys, judges, criminal defendants, civil litigants, and taxpayers.

Attorneys indicated to Eyewitness News that some of their clients are sitting in jail awaiting hearings and trials that are taking far longer than they should. Civil and criminal courts are sharing spaces and slowing the wheels of justice.

"It's been pretty awful all around," said defense attorney Nathan Hennigan. "The building has been pretty much a disaster from the day it was opened."

Attorney Phil Gommels said it's hurt his criminally-charged clients who can't get their day in court.

"It mostly affects the ones who are awaiting a trial in jail," he said. "You can imagine if you're awaiting trial and you don't have the money to make bond, the more incentive there is to plead guilty, even if the state can't prove it."

The courthouse, which flooded during Allison, has been plagued with complaints since it was built in 1999. Some have suggested demolishing it and starting over.

Harris County District Clerk Chris Daniel agreed the courthouse has always had problems, but fixing it and improving it are much cheaper options than demolition and reconstruction. He wants back in the building as soon as possible. He said a third of his 500 person staff worked out of the criminal justice center and is now spread across the city.

Daniel also believes the $86 million figure in the county engineering report is low and the cost could be much higher.