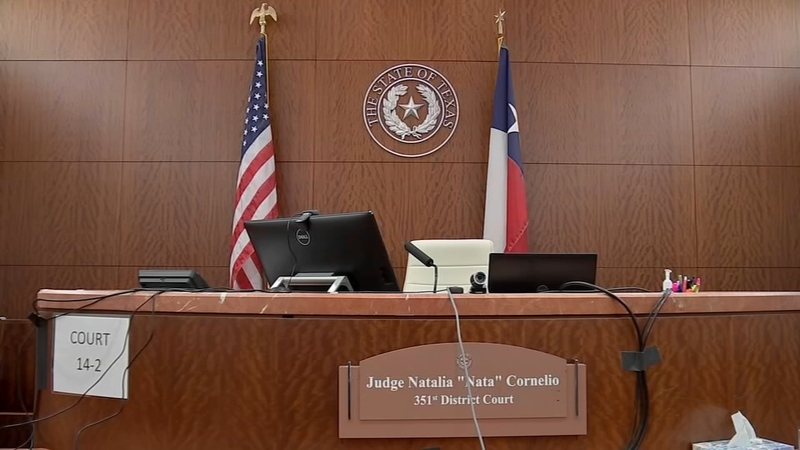 HARRIS COUNTY, Texas (KTRK) -- The courtrooms in the Harris County Criminal Courthouse are busy once again.

"I've been to the courthouse probably more in the last two weeks than I had been in the last two years," said Joe Vinas, the Harris County Criminal Lawyers Association president.

In fact, after years of delays and increasing backlog due to Hurricane Harvey and the COVID-19 pandemic, data shows a decrease in active cases. According to the Harris County District Courts Dashboard, 48,100 cases were active in March.

"Now, it's pretty close back to the full swing of things. You can go to several courts on any given floor in the courthouse and at least one of them will be in trial at this point," said Vinas.

ABC13 spoke with 351st State District Court Judge Natalia Cornelio on Friday evening after a lengthy trial week. She said there is no letting up insight.

High-profile cases that have been at a standstill for years are moving forward. There are three scheduled next week alone.

Andre Jackson, the man accused of murdering 11-year-old Josue Flores in 2016, will stand trial. A jury has already been seated.

Larry Woodruffe, charged with capital murder for the shooting death of 7-year-old Jasmine Barnes in 2019, will also be on trial.

The case against Jeffrey McDonald, believed to have murdered and dismembered his girlfriend, Rebecca Suhrheinrich, in 2018, is set to start mid-week.

"People have been waiting for justice in their cases, for their day in court, for a really long time," said Cornelio, who keeps an eye on her numbers and tracks progress. "I'm proud to brag that I have resolved more than 3000 felonies since I've come on the bench (in January 2021)."

Her court still has 2,100 active cases, which is average compared to the other 23 felony courts. Officials have said it could take two years to make a significant dent in the backlog.

"We're working really hard to come up with ideas, behind-the-scenes, administratively, to make sure there's extra resources available to lend a hand to some of these extra cases and backlog," Cornelio said.