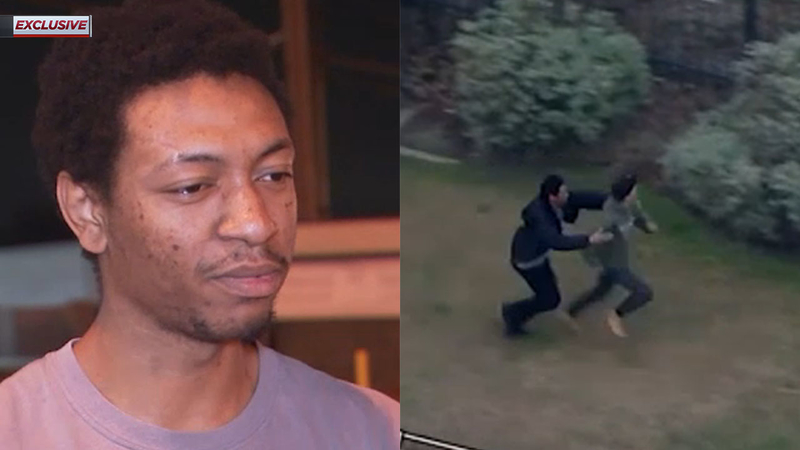 "I just ran behind him and tackled him down," said the good Samaritan named Devin.

The former track athlete from Westfield High School said he also worked as a trained security guard for two years. The combined experience kicked in as he witnessed the end of the law enforcement pursuit.

"I saw the suspect running all the way down and he was already 50 yards from the officer. So, I turned around, sped up, blocked him in and I got out of the car and started running," Devin said.

Authorities said it all began when a toll road unit spotted the stolen truck on Beltway 8 and tried to pull him over. They said the driver refused to stop and the pursuit began as the suspect drove up and down the Beltway near Fairbanks and in and out of neighborhoods before finally stopping behind an industrial complex.

ABC13 SkyEye caught the suspect on camera as he got out of the car and began to run away, but moments later Devin says his instincts kicked in.

"I was not even thinking, I just got out like a hero moment," said the 26-year-old.

Driving home from work, he spotted the end of the pursuit and watched as the suspect got over a security fence and started running down Fairbanks. Devin used his car to try to block the suspect, then got out and began sprinting after him, losing both of his shoes in the process as he went after the suspect, who was also barefoot.

The chase ended when Devin gave the suspect, who appeared to be losing steam, a big bear hug and held him until authorities caught up.

"What I was thinking about in the moment was to make sure I had all his hands real tight because I didn't know if he had something in his pockets," said Devin. "He said 'OK, OK.' I said, 'Stay down don't move.' He said, 'OK, I'm going to stay down.'"

Speaking with ABC13 hours after the ordeal, Devin said he would still do it again even knowing the risks, and offered words of encouragement for the suspect who has not been named yet.

"I wish him the best. You learn from your first mistake. Whenever you get out, try to learn from this mistake and not get into any more trouble," he said.