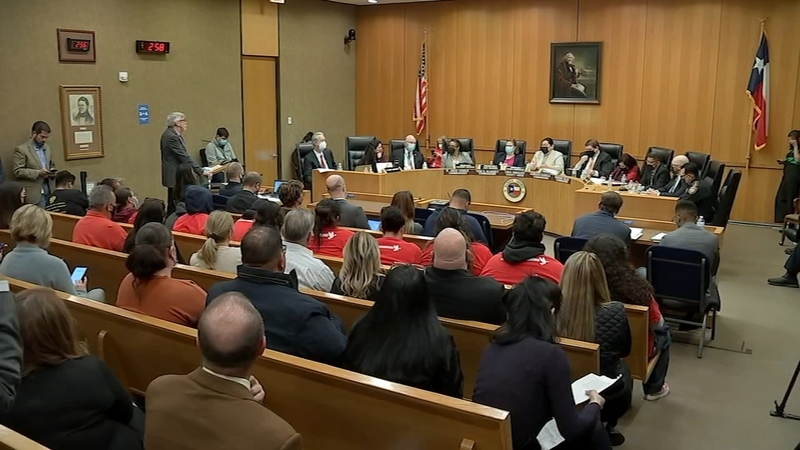 "Please do your duty, vote to approve this policy change," Paul Castro told members of the Harris County Bail Bond Board during Wednesday's hearing. "Do it for David and all the families who are here today."

Castro's son, David, was killed during a road rage incident in 2021. The suspect was arrested and is currently out on bond. The elder Castro says the suspect was able to pay just 2% of his $35,000 bond to get out.

The proposal before board members would have required any Harris County bonding company to collect 10% of a surety bond, present proof of that payment to the Harris County Sheriff's Department, before the suspect charged with a violent offense would be allowed to bond out. The rule would only apply to violent and sexual crimes such as murder, sexual assault, aggravated robbery, and about 15 other categories.

"There's a lot of players in this system, and everyone has to do their part," said Harris County Judge Lina Hidalgo, who supported the change. "We have an opportunity today to fix a part of the system."

Hidalgo though, was just one vote. There are 11 members on the Harris County Bail Bond Board. To get the measure to pass, there needed to be a majority vote by members who were present at the meeting. On Wednesday, three members of the board were absent. Four people, representing the County Judge Hidalgo, Sheriff Ed Gonzales, County Treasurer Dylan Osborne, and District Clerk Marilyn Burgess voted 'Yes.'

McKinney told ABC13 that the regulation would not pass a legal challenge.

So the deciding votes were left to Justice of the Peace Angela Rodriguez and a representative for District Attorney Kim Ogg. Both abstained. The measure failed 4-4.

"There was not a 'No' vote, there was an abstention," Ogg explained on Thursday. "I think any time we go to try and protect people, we got to have enforceable laws."

Ogg said her legal team was concerned that the regulation as written would not survive a legal challenge.

"Instead of talking about cash bonds, and PR bonds, what I'm for, as your DA, is holding your violent offenders pretrial in jail and giving them speedy trials," Ogg said.

Rodriguez did not return our calls for comments.

Of the three absentees, J. Elaine Marshall, the presiding judge of the Houston Municipal Courts, released a statement saying she had a family emergency and had to leave halfway through the meeting on Wednesday. Marshall said she would have been a 'Yes' vote otherwise, and plans to vote as such the next time the issue comes up.

Garcia said he plans to ask members of the board to bring back the issue next month, when it meets again. "This the right thing to do. It's easy, it makes sense, and so I'm going to keep working on this, and I look forward to bringing it up again back on the agenda."