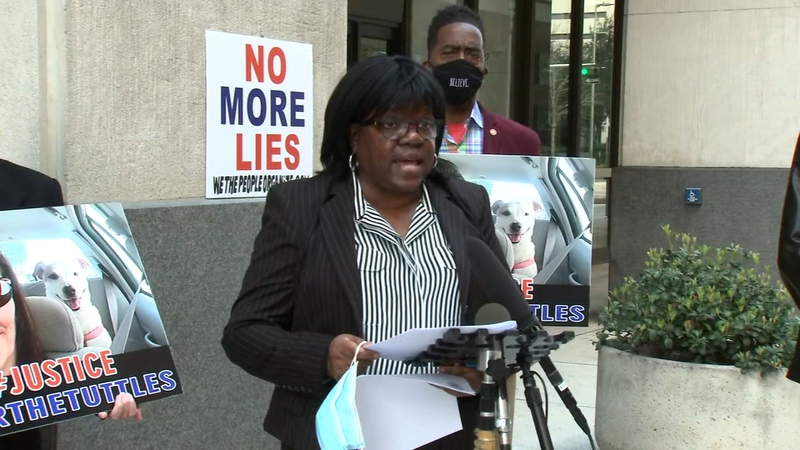 Activists claim HPD was warned about misconduct prior to raid

The group "We The People Organize" gathered in front of HPD headquarters. They stood with photos of the Tuttle family and their dog, who were killed during the raid, and posters that said "No more lies."

"A house divided cannot stand, and today, we are standing in front of a divided house," said Noel Pinnock, CEO of Texas Cops and Communities Incorporated.

We the People Organize claims a former HPD officers tried to warn officials that other officers were fabricating evidence and lying to judges back in 2018.

They believe if something had been done, the botched raid where Rhogena Nicholas and Dennis Tuttle were killed may have never happened.

"As a result of HPD's deadly actions against the Tuttles and the community at large, people are too often afraid of the police," We The People Organize founder Hai Bui said. "That is why we are on a mission to heal the community and let those in the community know that there are more good cops than bad ones. We also call upon good police officers to report corruption to help heal our community and to hold corrupt officers accountable."

State records still show her as being dishonorably discharged, which she said ended her 22-year career in law enforcement.

Swilley had one pressing question for HPD Chief Art Acevedo, "What are you going to do to make this wrong right?"

On the heels of Swilley's plea, Tammie Lang Campbell, founder of the Honey Brown Hope Foundation, called for a thorough and complete investigation into incorrect F5 forms submitted to the Texas Commission involving all former HPD officers issued dishonorable discharge after reporting misconduct within the department.

She said rogue cops need to be held accountable, and good officers need to feel encouraged to stand against corruption and report misconduct when they see it.

A botched raid that took two lives, shocking court findings and murder charges... here's a look back at the HPD Harding St. raid.

Former HPD Sergeant Shelby Stewart also spoke with We The People Organize, stating that the Harding Street raid has been a stain on the integrity of the Houston Police Department.
Stewart addressed Acevedo directly, asking him if he had apologized to the families of Tuttle and Dennis for "smearing their reputations."

He said the department's actions are an indication that an independent review board that keeps an eye on HPD operations is needed. Pinnock described the department as a "secret society where bad cops thrive and innocent people die."

The group says Dave Atwood with the Greater Houston Coalition for Justice wrote a letter to Acevedo regarding the reports of fabricated evidence in 2018, advising that the coalition was concerned the behavior was detrimental to Houstonians. Atwood requested a meeting to discuss his concerns with Acevedo, but the meeting reportedly never happened.

The GHCFJ also reportedly requested an official investigation into HPD Lieutenant Marsha Todd, who was later named in civil litigation related to the Harding Street raid.

"It's clear that corruption exists within the Houston Police Department and the problem is much bigger than Officer Gerald Goines or the Narcotics Division, the corruption is much broader," Bui said. "What happened to the Tuttles, the countless victims arrested on bogus drug charges, and police whistleblowers can happen to anyone without a citizens review board... Change is needed."

ABC13 reached out to HPD for a comment regarding the claims from We The People Organize. In a statement, HPD said, "Chief Acevedo has personally met with Ms. Swilley in his office on more than one occasion, and other executive members of the department have met with her as well. This fact is substantiated by a letter sent to Chief Acevedo by the Greater Houston Coalition for Justice dated June 26, 2018.

The matters of concern raised by Ms. Swilley have been reviewed by an independent arbitrator and the courts, and the department's action related to her former employment with HPD was upheld. No further comments will be made regarding her repeated unfounded allegations, which are raised on what is starting to appear to be a regular basis."

Felipe Gallegos became the second person to face a murder charge in the Harding Street raid from 2019 that left a married couple dead.