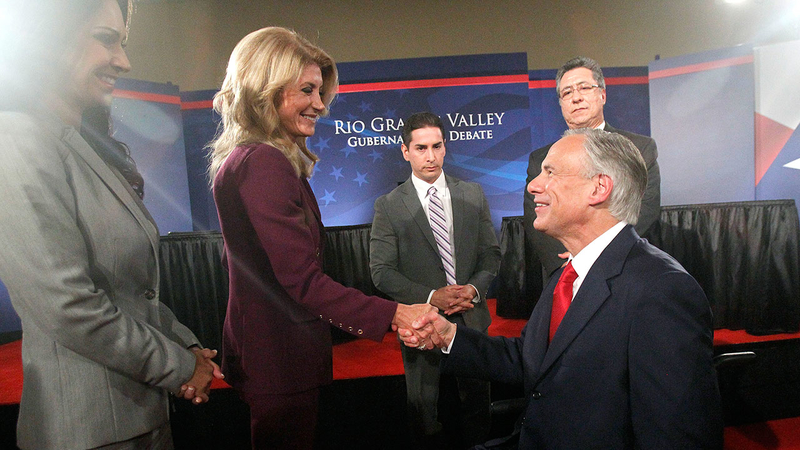 Still, no real fireworks livened up a mostly dry gubernatorial debate in the Rio Grande Valley - a backdrop that made border security a major topic. Davis needs a spark with less than six weeks until Election Day, and the underdog made eye contact with the Texas attorney general to question what she called his "dumb" defense in court of $5.4 billion in public school cuts.

But Abbott didn't ruffle. He played it safe in this final stretch of a costly race that he's led from the start, content to let Davis' attacks slide and not risk any gaffes. Nonetheless, he still managed to put Davis in a tough spot - but with a question, not any answer.

"Do you regret voting for Barack Obama?" Abbott asked.

Davis seemed to laugh nervously and didn't answer. At other times, her digs came off more rehearsed than spontaneous.

The Fort Worth state senator stuck to education and women to lob her toughest attacks. On the major Texas school finance lawsuit that ended with a state judge ruling the deep cuts unconstitutional, Davis pressed Abbott on why he won't drop an appeal.

"That's not liberal, that's not conservative, it's just dumb," Davis said. Abbott said he's bound by his office to continue to fight.

Both reiterated earlier support of Gov. Rick Perry recently deploying the Texas National Guard and state troopers to the border, a decision that has drawn wide criticism in the Rio Grande Valley, which was hosting a gubernatorial debate for the first time.

The setting was significant. Abbott has intensely courted Hispanic voters and reminded viewers that his wife, Cecilia, would become the first Latina first lady of Texas. Davis said she would spend state dollars to repair the image of the Rio Grande Valley that she says has been battered by fiery rhetoric from Republicans.

Women's issues figured to be the most delicate task for Abbott in a face-to-face debate with a female candidate, but Abbott didn't respond to attacks over equal pay in his office or claims that his policies don't protect women. Affirming his opposition to abortion was the closest he got.

"I will develop a culture of life in this state, so we can protect both women and children," Abbott said.

This is the first open Texas governor's race since 1990, when Ann Richards became the last female and Democrat to win the job. Democrats have made comparisons to Richards pulling off a late comeback that year, but time for Davis is quickly running out.

She has unleashed rounds of TV attack ads statewide by tapping more than $27 million in fundraising - a record for a Texas Democrat. A memoir Davis recently published revealed an abortion she had in the 1990s for medical reasons, and on the campaign trail, she has better harnessed the tenacity that first made her famous during her nearly 13-hour filibuster last year.

But Abbott still remains a big favorite, entering the final stretch with a 3-to-1 edge in cash to spend and double-digit polling leads.

Hours before the debate, Davis got a pep talk of sorts from the White House.

Vice President Joe Biden said "do not give up on that race" at a Democratic National Committee event in Washington. Hillary Rodham Clinton also mentioned Davis among a slate of female candidates this election year "who give me hope" while speaking at the same Women's Leadership Forum.