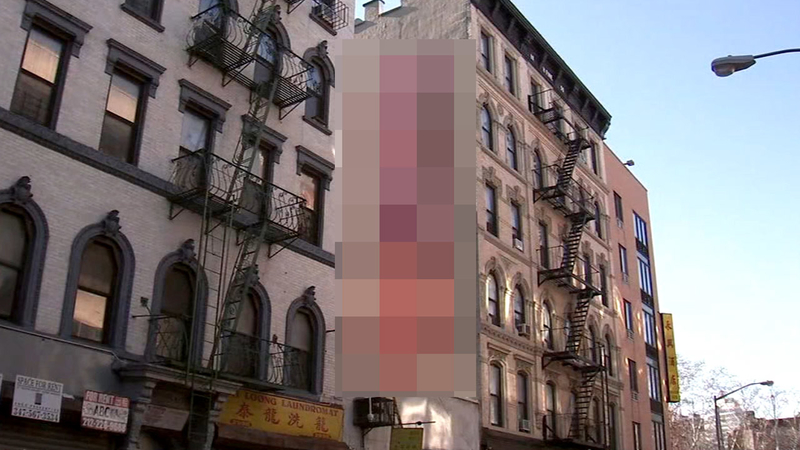 MANHATTAN, New York -- WARNING: The content of this story may be considered vulgar to some people and may not be appropriate for all readers.

People in one New York City neighborhood are looking to return their giant, unmistakable Christmas gift from an artist -- a mural depicting male genitalia.

The painting went up on Christmas Day on Broome Street in the Lower East Side of Manhattan.

Swedish artist Carolina Falkholt is apparently behind the mural. She specializes in graffiti painting, according to her website, and "her work challenges old ideas of gender stereotypes and the use of the female body."

After her latest controversial, penis-shaped mural was complete, she posted a photo on social media with the caption: "I have never heard so much laughter and seen so many happy faces behind my back when painting as for today doing this wall on Broome Street.

See a photo of the controversial mural here:

Reaction, even on her own post, has been mixed.

Others defended the artist's work.

@photoimagepicture wrote: "As a lifelong New Yorker, I've seen a lot worse than this walking down Broome St/Houston during both day and night. Art is art, whether you agree with it or not. As an artist, one of the first things you'll learn is that you can't please everyone, therefore, you shouldn't attempt to. Society has us in a box of shame and regret to talk and express our true selves. The ones who do so are crazy, outcast, rude, selfish, etc. People are more pissed off at being forced to explain reality to a child as opposed to disguising it as a fantasy land.

Amid the controversy, the mural is coming down.Crews started painting over the art Wednesday afternoon.

Falkholt apparently was behind a second mural that went up two days before Christmas in the same neighborhood. This one depicts female genitalia. There's no word yet if that one is being painted over, though.