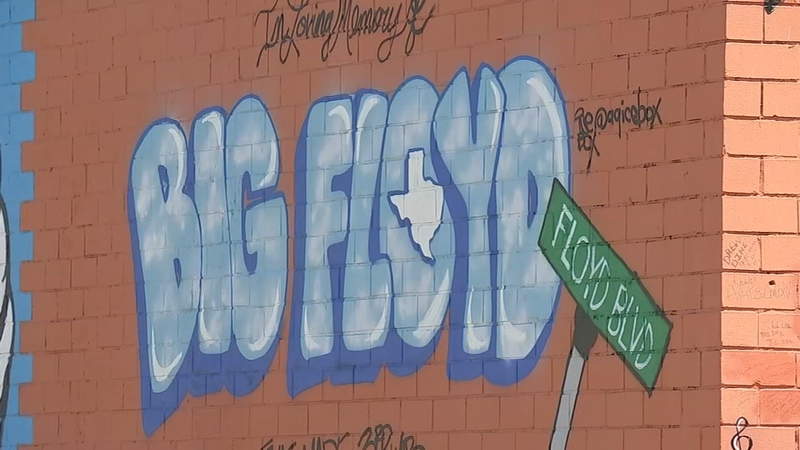 HOUSTON, Texas (KTRK) -- If you drove by the Scott Street corner store Monday, nothing would be out of the ordinary. The now-iconic George Floyd mural painted on side of the store loomed quietly over the neighborhood.

But listen for a moment, and you might hear Chris Hutchins, who looked up to Floyd as a big brother growing up, talk about the emotions of this day. Monday was the first day of the trial against Derek Chauvin, the former officer who allegedly killed Floyd by placing his knee on Floyd's throat. It is also the first day of possible justice.

"Even if he was intoxicated or whatever," said Hutchin. "That doesn't mean kill him. You don't kill a person just because they're intoxicated."

In Houston's Third Ward, there doesn't need to be a rally or a protest to feel Floyd's presence, it already permeates every corner.

IN CASE YOU MISSED IT: The former Minneapolis police officer who pressed his knee into George Floyd's neck went on trial on charges of murder and manslaughter. ABC13's Chauncy Glover spoke with former prosecutor and state attorney Wilvin Carter for a recap of what you missed.

"I've had a lot of friends call, and ask if I was alright," said Herbert Mouton, who played basketball and football with Floyd at Jack Yates High School. "I guess they figured I would be watching it, and emotions would be taking over."

May 25, 2020, is now painted on the ground in front of Yates High School, along with the words, "Black Lives Matter." So much has happened since Floyd's death. There were the international protests, the emotional Houston home going, tributes from all corners of the world, and now the trial.

"Today is really an emotional day for us. All we can do is listen, and hope that justice is made," said Mouton.

Mouton and other Yates alumni, including long-time community activist Carl Davis, have formed a foundation, 88 CHUMP, in honor of Floyd's football jersey number.

They want Floyd's legacy to been seen at the ballot box.

"The legacy we are building is slowly in honor of Floyd, to keep it alive, and to educate our community on the importance of voting," said Mouton.

"We want justice," said Davis. "I hope we can get justice for the Floyd family."

Davis is also working with Mouton to raise money to fully revamp the Yates football field. Once completed, it will be a gathering place for the entire community, and it will bear Floyd's name.

"That's the Yates spirit. We're a close-knit family," said Davis. "Whether something happened to us, we all come together, same class or not."

In the meantime, they will all be watching to see what happens at the trial.