George Floyd's family and teacher react to his death 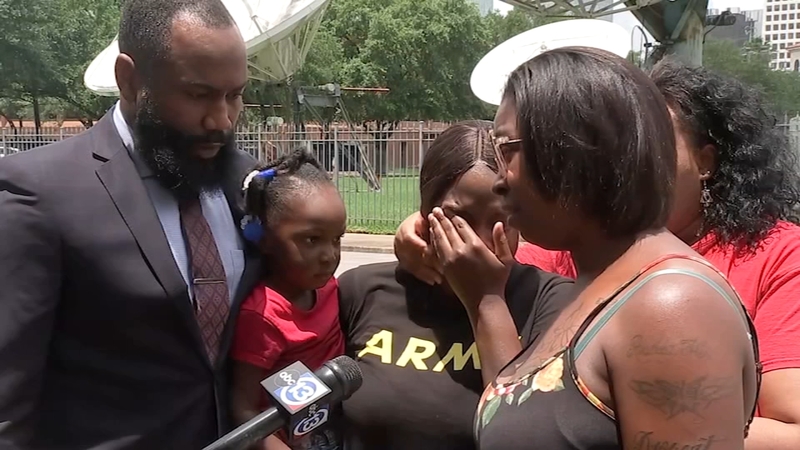 HOUSTON, Texas (KTRK) -- Family members and a former teacher of George Floyd opened up to ABC13 about his devastating death caught on video and seen around the world.

"They hurt these girls really, really bad," said Rose Hudson, who dated Floyd more than 20 years ago. "My daughter had to see her daddy get killed on live TV."

Hudson, her daughter Tanjanica George, and 3-year-old granddaughter Journi met up with ABC13 for their first interview since Floyd's death at the hands of Minneapolis Police.

"I will just let her know what a great guy he was," said Hudson, holding the granddaughter Floyd will never meet. "He was a good father to his girls. I just have memories, that's all I can give her, memories of her grandfather."

The former couple's adult daughter was too distraught to talk, crying continuously as her mother Rose spoke on the family's behalf.

"I'm numb to the point where I can't do anything. Watching my daughter hurt, knowing what she's going through," said Hudson. "It's just not fair, not fair to anybody."

Floyd's family members are not the only ones struggling to understand what happened.

"It breaks my heart, he was murdered by a helper," said Dr. Waynel Sexton, long time educator who taught Floyd in second grade. "As teachers, we teach our children to find helpers when we are in trouble, to find the policeman. I wonder now, as I have been for some years, what do we teach our young black men? Who are the helpers for the young black men?"

RELATED: Mayor: Officer who put knee on George Floyd's neck should be charged

Sexton kept works of her students over the decades. She found Floyd's 2nd grade Black History Month assignment. In the drawing and writing, Floyd, known as Perry to his classmates, wrote that he wanted to be a Supreme Court Justice. His drawing showed a judge and a jury. It was made 38 years ago.

"We have to teach our children now how to approach a police officer," said the veteran teacher. "I know many police officers are good men, but we have to do better."

As for Rose Hudson, her daughter, and granddaughter, they said they are surviving with support from friends and their pastor. The family is still working on Floyd's funeral plans.