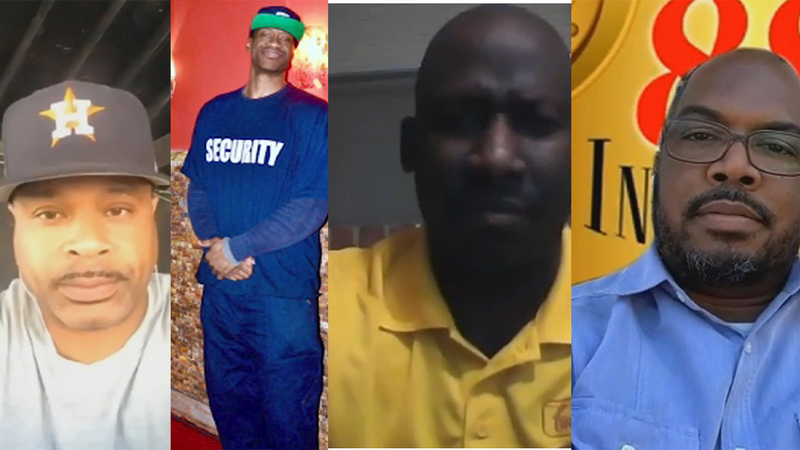 HOUSTON, Texas (KTRK) -- About 10 weeks after George Floyd's death, his closest high school friends are working together to make sure his legacy is a catalyst for change in their communities.

"For us, we feel like this is our mark we're supposed to leave on our generation. To make it better for the next generation," Jonathan Veal said. Veal is one of three former high school classmates of Floyd who spoke to Lottie Joiner, the editor of the NAACP, The Crisis Magazine.

Vaughn Dickerson and Herbert Mouton are the other two classmates who joined in on the Facebook Live conversation about Floyd's legacy. All three played football with Floyd at Jack Yates High School in Houston's historic Third Ward.

"I'm still in disbelief. You hear it in my voice, it's hard to digest," Dickerson said. "He was not a troubled individual. He knew not to resist the police. He knew not to disrespect an officer or bring a counterfeit bill, that's not him."

"That video, it was unreal," Mouton remarked, who spoke to ABC13 days after Floyd's death. "When we talk about police brutality, it's always snippets, a piece of video there, or here. But, to actually see my friend, my teammate, colleague, brother murdered on national TV, it's painful. It still is."

"It takes a heck of a lot of oxygen to talk," body cameras recorded Derek Chauvin saying as George Floyd said he couldn't breathe.

The three lifelong friends as well as other alumni are working to launch 88 C.H.U.M.P initiatives, which stands for Communities Helping Underprivileged Minorities Progress. The organization's goals are to increase and improve community dialogue with police, increase voting participation, improve education, and housing opportunities in their communities.

RELATED: Thousands pay respects to George Floyd in Houston viewing
"His death has challenged me, to not only stand up, but speak up, and be accountable," Veal said.

Dickerson says as years passed, many high school classmates went on to college, built careers, families, and moved out of the old neighborhood in Houston's historic Third Ward. Floyd's death has reminded all of them, who may have found a more comfortable life in the suburbs, to get reengaged in the community where they grew up, and to make sure the kids are not left behind.

"Voter education. Also, we're trying to get our people to march to the polls, unify, so there won't be no, 'line is too long.' No, we're going to sit there and wait, because change is desperately needed," he said.

For Mouton, his focus is to make sure his children, and their friends, learn from Floyd's death. "The only thing I can do is teach my kids about it, educate them on how to go about making a change. Teaching them about voting, which I wasn't taught coming up. It has changed me in that I know I have to educate my kids."