Dunkaroos snacks to go back on sale, General Mills says 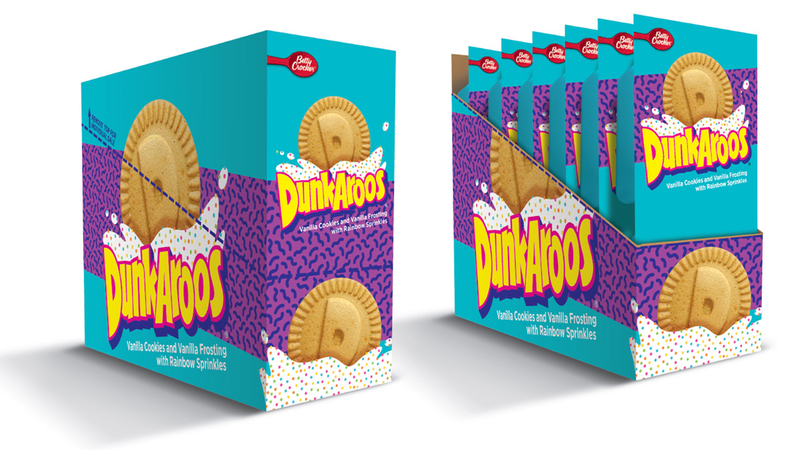 By now, you've probably heard the news - Dunkaroos are returning!

The General Mills snack consisting of graham cookies and frosting is making its way back on stores shelves this summer.

Dunkaroos was beloved grub for kids who grew up in the 1990s. But some may not be as familiar with the tasty treat as others. Therefore, let's dunk into some delicious facts about the nostalgic nosh to get you prepared for its big return.

Dunkaroos was first introduced in 1992 by General Mills, under the Betty Crocker brand. Honey graham cookies shaped like kangaroos were paired with frosting in a single-serve tray.

By 1993, Dunkaroos introduced new flavors of frosting, including Chocolate Chip, Cinnamon, Peanut Butter, and its most popular flavor - Rainbow Sprinkles.

From Sydney to Dunk

You wouldn't have the 'roo' in Dunkaroos without its kangaroo mascot. Originally, the kangaroo was named Sydney. In 1996, the public was allowed to re-imagine the kangaroo by drawing their own version and sending it in to the 'Kanagroo?! Kanga-who?!' contest.

The winning kangaroo mascot was Duncan the Daredevil. In the 2000s, he went through another name change - Dunc.

After being part of snack time for two decades, General Mills officially discontinued Dunkaroos in the United States in May 2012.

However, they remained available in Canada - which made U.S. Dunkaroos fans ask, 'eh?'

The outrage over a Dunkaroo-less America was felt by all snack pundits, including the famous.

Just weeks after they were gone from store shelves in 2012, Tyler the Creator tweeted, "Dunkaroos I need To Find These."

Dunkaroos I need To Find These

Lily Singh tweeted "Dunkaroos with the vanilla sparkles frosting" in 2017, which confused a lot of her younger followers who were not aware the treat ever existed.

Dunkaroos with the vanilla sparkles frosting.

Kim Kardashian declared her obsession for Dunkaroos in 2018. "Please come back!" she tweeted.

Last year, Chrissy Teigen was searching Amazon for Dunkaroos. "U can only get Kadunks," she lamented.

if u try to buy dunkaroos on amazon, u can only get kadunks (still buying) pic.twitter.com/01kvjn96f0

And once he heard the news of their comeback, Frankie Muniz tweeted, "Are you kidding me? I live for Dunkaroos!!!!"

Are you kidding me? I live for Dunkaroos!!!!

"After years of pleading - and tweeting - from celebrities, fans and snack food connoisseurs alike, General Mills is bringing back one of THE most sought-after snacks of the 90's," General Mills said in a statement to us on Monday.

"We're thrilled to relaunch Dunkaroos in the U.S. after years of it only being available in Canada," said Jeff Caswell, president of Snacks at General Mills. "For those who grew up in the '90s, the original cookie-frosting combo represents the taste, color and fun of being a kid during that decade. We know there's a lot of love for Dunkaroos, and fans everywhere have been asking for it. We're excited to help '90s kids relive all the best parts of childhood."