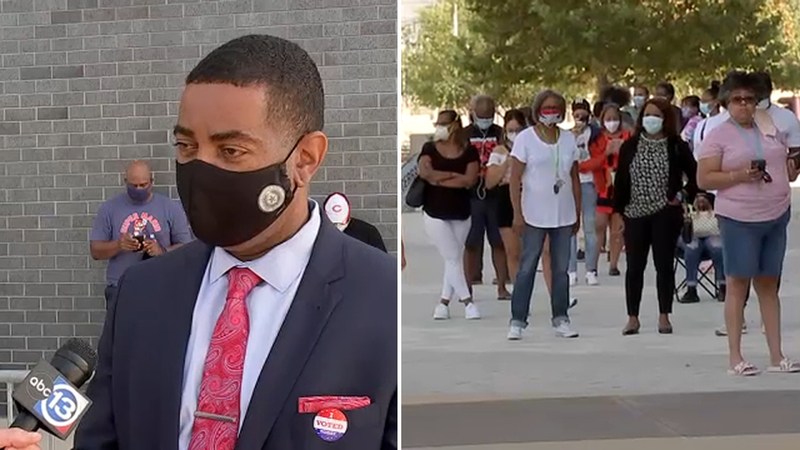 "The report I got so far, is that all stations are moving. Some places may have a long cue and people are standing in line, but it's moving along," said George.

The Fort Bend Commissioners Court voted to increase election workers pay after voting hours were extended for the rest of the week.

"All those changes, when we proposed them, it put pressure on them so we just want to make sure they are happy and they are willing to continue to contribute," George added.

As far as numbers go, early voting was down on the first day of early voting. George said just over 12,000 people voted. The judge thinks there's several reasons for the decrease, one being the technical issue. He said another issue could be straight ticket voting.

"People are taking more time at the poll, you know, because they don't have straight ticket voting," said George.

On Tuesday morning, polling places got off to a rocky start after reported errors became common at multiple locations.

ABC13 received numerous calls and messages from viewers in the county reporting that they weren't able to vote. Shortly before 9:15 a.m., a precinct judge at a Missouri City polling place said the issue had been resolved and people were able to begin voting.

SkyEye was over the area in Sugar Land, where people were outside City Hall and Smart Financial Centre.

Still, outside of the event center, Fort Bend County Judge KP George said that for at least one hour there was an error in their program, delaying voting.

"Definitely apologize for that inconvenience, and as I understand, the machines are back," George said. "The Smart Financial where we are right now, it is up and running. We are back online, and I hope there won't be any distractions for voting. Once again... I just wanted to say sorry for what happened and we will be doing an investigation. We will be holding those responsible for it accountable. What happened is not OK, not acceptable in Fort Bend County."

I am extremely disappointed with the technical glitches that riddled Fort Bend County Election machines this morning. Remember, people have died for our right to vote. Stay in line or come back at a convenient time - the future of our country depends on us. You have three weeks to vote early. Remember, we have also extended the hours on the last three days of Early Voting till 9pm for working families. Those who are responsible will be held accountable. In an era where voter suppression is real, I will authorize a full investigation and call for accountability. I'm personally out here at Smart Financial Mega Site monitoring the situation.

Later in the day, George clarified that a programming error caused the issue. The system was programmed for the wrong day. It's unclear if it was human error or a technical issue.

"We are working with our vendor and the election administration and also (the) IT department, is working together to make sure this does not repeat and we are doing an investigation to find out what happened," said George.

In addition, Brian Middleton, the county's district attorney, who addressed overall concerns of voter suppression, added it was "too premature" to consider the errors intentional.

Despite the delays, people were willing to wait because this election means that much to them.

Another voter, unfortunately, didn't count on the holdup, and his scheduled flight had to change.

You can find a map of early voting centers in Fort Bend on this website.

These people weren't in line to try the latest food! They woke up when it was dark and early to cast their vote. Here's why it mattered so much.