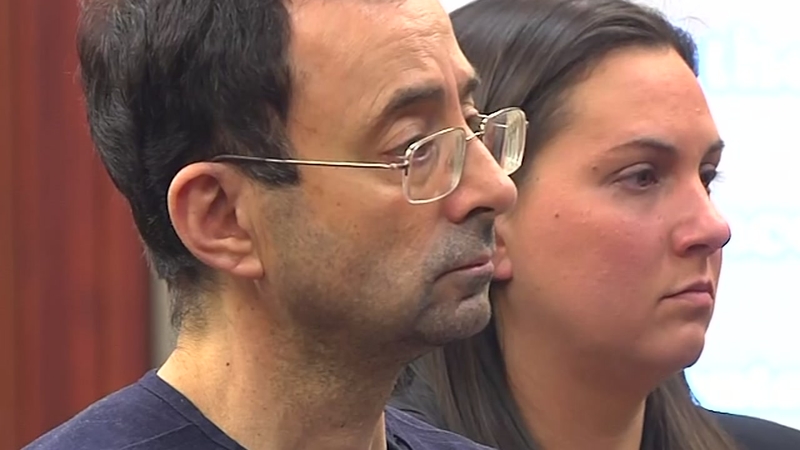 A current collegiate male gymnast joined a civil lawsuit against Larry Nassar earlier this week, becoming the first man to say publicly he was abused by the disgraced former doctor and convicted sexual predator.

Jacob Moore, a freshman on the Michigan gymnastics team, said in court documents that Nassar performed acupuncture on his pubic area in front of a female gymnast when both gymnasts were minors. Moore says the incident happened when he went to Nassar's home seeking treatment for a shoulder injury.

Moore is the younger brother of Kamerin Moore, a collegiate gymnast who says she was also abused by Nassar. Kamerin Moore described the abuse her brother received while giving a statement at a sentencing hearing in January for Nassar's crimes.

"I was there for one person, and I had to watch them process their confusion. My own brother, imagine that," she said while addressing Nassar in court. "When he realized what a monster you are, I watched him frantically search the internet trying to find some proof that the qi in his shoulder is somehow connected to his genitals."

18-year-old Jacob Moore said Larry Nassar sexually abused him while he was undergoing treatment for his shoulder.

Nassar pleaded guilty to 10 counts of first-degree criminal sexual conduct in November. He admitted to using his position of authority as a renowned osteopathic doctor at Michigan State and the national medical coordinator for USA Gymnastics to abuse children. The 54-year-old Michigan native is sentenced to a minimum of 40 years and maximum of 175 years in state prison for those crimes. He is also serving a 60-year federal prison sentence for crimes related to child pornography possession. The Moore siblings are two of the roughly 300 plaintiffs who have joined civil lawsuits against Nassar and a host of others who allegedly failed to stop him when presented with chances to do so.

According to the amended lawsuit filed this week, Nassar mentioned that he was exposing Moore's genitalia, as he did it, to a female minor who had arrived at Nassar's home to be treated for an injury of her own. Nassar regularly invited patients to visit him after business hours in the basement of his home if they needed help with injuries, according to women in the lawsuit. Several other gymnasts and the daughter of Nassar's former family friends have detailed in interviews and in court statements that Nassar abused them in his basement.

More than 250 people had filed complaints to the police about Nassar at the time of his last sentencing hearing in early February. All of them at that point were women or girls. It is not clear whether Moore has filed a police complaint or plans to do so in the future.

The civil lawsuits also name several other people and institutions as co-defendants. That list includes Michigan State, USA Gymnastics, the U.S. Olympic Committee and Twistars Gymnastics, a Michigan-area club where Nassar treated injured gymnasts on a weekly basis. The suits claim that individuals associated with all of those organizations shirked their responsibility to report suspicion of Nassar's behavior despite more than two decades of warning signs and complaints from girls he was abusing.
Report a correction or typo
Related topics:
larry nassarsexually assaultgymnasticslawsuitsex crimeu.s. & worldchild sex assault
Copyright © 2021 ABC News Internet Ventures.
More Videos
From CNN Newsource affiliates
TOP STORIES