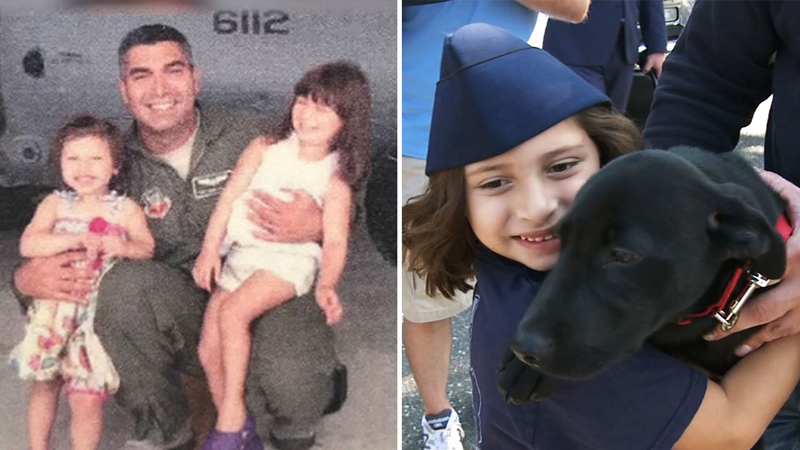 COMMACK, New York -- Before Master Sgt. Christopher Raguso was deployed overseas, he promised his two daughters he'd get them a puppy when he returned.

The 39-year-old Raguso was among seven airmen killed when their helicopter crashed in Iraq on March 15.

The sudden and tragic death of a husband and father shook the entire family, but his youngest daughter, 5-year-old Eva, had an especially difficult time coping with loss.

"She tosses and turns, and she's in bed with me every night. She sleeps in daddy's spot," said Carmela Raguso, Chris' widow.

Thanks to Paws of War, an organization that places shelter dogs with U.S. military veterans and families, Chris' promise came to fruition, and his family has a little more peace.
Paws of War volunteers surprised Eva and her 7-year-old sister Mila on Friday with a black Labrador rescue puppy named Calvin.

The girls were overjoyed to meet the new member of their family.

Carmela agreed. Adopting Calvin was a dream come true, and she hopes he will help Eva sleep better at night.

"To have this dog be her buddy and be her sleeping buddy, maybe we'll get some peace," she said.

Michelle Charlesworth reports on a fallen Long Island airman's promise for his family.