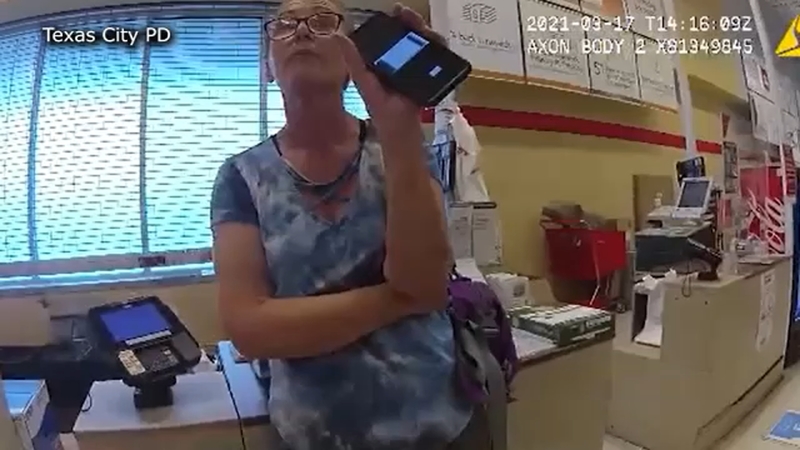 TEXAS CITY, Texas (KTRK) -- While a takedown to the floor wasn't necessary, police body camera video of a maskless woman being arrested for the second time in six days showed her in the middle of a recitation of her "rights" inside an Office Depot store in Texas City.

However, much like her previous arrest at a Bank of America branch in Galveston, the woman, who police identified as 65-year-old Terry Lynn Wright, had showed some resistance when an officer slapped handcuffs on her Wednesday.

According to Texas City police, Wright was asked to leave the store by employees for refusing to cover her face.

Instead, as the video shows, the woman stood at the checkout area of the Office Depot on Emmett F. Lowry Expressway loudly reading off of a phone.

"Ma'am, if you refuse to leave, you're going to go to jail for trespassing," the officer tells Wright, who responds by telling the officer to read her phone.

"These are my federal rights," Wright retorts. "You're in violation of the law."

It's at that point the officer produces handcuffs and grabs Wright's arm to arrest her.

"This is a major violation!" Wright yells.

As Wright is taken into a police vehicle, additional officers arrive, with one of them almost instantly recognizing Wright as the same person from the Galveston incident.

You can watch Texas City police's body camera footage in the video player above.

Wright was booked into Galveston County Jail for criminal trespass and resisting arrest, search or transport. Her bond totaled $2,500.

On March 11, a day after Texas lifted COVID-19 restrictions, Wright was taken into custody on warrants related to a similar mask refusal and trespass incident inside the Bank of America on Central City Boulevard.

Her confrontation with Galveston police was captured on a body camera.

Press play to watch a FaceTime interview with Terry White, the woman who was taken down by security after she refused to comply with the bank's face mask protocol.