Steve Mason out for Game 1 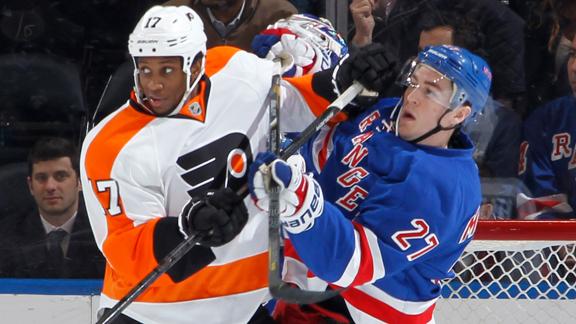 GREENBURGH, N.Y. -- The Philadelphia Flyers will be without starting goaltender Steve Mason for Game 1 of their first-round matchup against the New York Rangers.

The 25-year-old Mason suffered an upper-body injury in Saturday's 4-3 overtime win against the Pittsburgh Penguins. According to reports out of Philadelphia, Mason won't accompany the team to New York, potentially throwing his availability for Sunday's Game 2 into doubt, as well.

Mason will be replaced by backup Ray Emery, who backed up Corey Crawford for the Stanley Cup champion Chicago Blackhawks last season, when the Rangers and Flyers square off Thursday night in the rivals' first playoff meeting since 1997.

Emery has an impressive record against the Rangers. He is 7-2-0 with two shutouts, a 1.87 goals-against average and a .936 save percentage in 10 games against New York.

Combine that with Mason's limited amount of playoff experience and lack of success -- he was saddled with all four losses in the Detroit Red Wings' first-round sweep of the Columbus Blue Jackets as a rookie in 2009 -- and maybe that's not such a bad thing.

The two players have similar numbers, with Mason posting a .923 even-strength save percentage, just slightly better than Emery's .920.

Flyers captain Claude Giroux told reporters Wednesday that the team has confidence in both goaltenders.

"It doesn't matter to all the players," Giroux said. "We have a lot of confidence in [Emery] and [Mason] to play hard and play for the team. It's fun to have two goalies like that."

Emery, who was 9-12-2 with a 2.96 GAA and a .903 save percentage in 28 regular-season appearances this season, said he's eager for the opportunity if his name is called.

"If I get a chance to play, I'm always excited to play, especially the playoffs," Emery told reporters Wednesday. "Especially with a team like this. It's definitely a team effort when you talk about the Flyers. We're confident that we can win a series."

The Rangers said their focus will not change regardless of who is between the pipes when the puck drops Thursday night.