The facilities going offline resulted in the loss of about 2,900 MW of power, ERCOT's CEO said.
KTRK
By Courtney Carpenter and Mitchell Ferman, The Texas Tribune 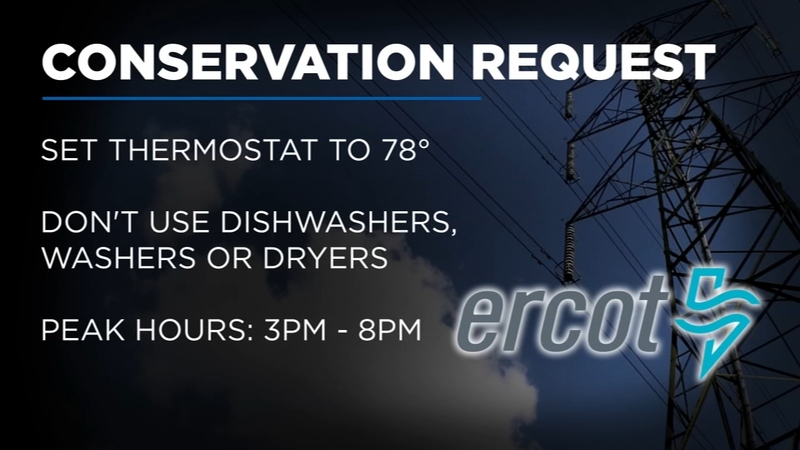 HOUSTON, Texas (KTRK) -- ERCOT, the embattled power grid operator for most of Texas, is urging customers to conserve energy for a five-hour peak period on Saturday and Sunday as it confronts both unseasonably hot weather and six power generation facilities tripping offline.

Jones added that with soaring temperatures expected for the second straight weekend, power demand will be pushed to the limit.

"We're asking Texans to conserve power when they can by setting their thermostats to 78 degrees or above and avoiding the usage of large appliances (such as dishwashers, washers and dryers) during peak hours between 3 p.m. and 8 p.m. through the weekend," Jones said in a statement.
As of late Friday afternoon, all reserve generation resources available are operating, Jones said.

April and May are referred to as "shoulder months" in the energy world. That's the time of year when power plants go offline in order to conduct necessary maintenance and other repairs before the hot summer months.

One Houstonian ABC13 spoke to says he plans to do what he can to conserve power this weekend and was 'bummed' to hear the grid is in this situation still-wishing that there had been more action towards improving it.

"What I thought and what I said to somebody else is 'looks like the grid is in trouble again' so not good news," said the Houstonian.

A spokesperson for ERCOT, which operates the state's main power grid, told The Texas Tribune he does not expect there to be electricity blackouts this weekend.

ERCOT did not say why the plants unexpectedly tripped offline. All reserve power was operating to support the grid, the agency said.

The power plant failures led to a loss of about 2,900 megawatts of electricity, which is enough to power more than 580,000 homes.

Power grids must keep supply and demand in balance at all times. When Texas' grid falls below its safety margin of excess supply, the grid operator starts taking additional precautions to avoid blackouts. The first precaution is to ask the public to cut back electricity usage.

ERCOT, however, has recently told multiple power generation companies to delay maintenance on their equipment so the grid could keep up with the hotter-than-usual temperatures recently, which in turn leads to elevated demand for power when Texans crank their air conditioners.

While it's not uncommon for power grid operators to ask consumers to cut back on electricity use as a precautionary measure, many Texans vividly remember February 2021, when millions of people were without power for days in subfreezing temperatures after a combination of cold weather across the state and skyrocketing demand for energy shut down power plants as well as the natural gas facilities that supply them with fuel. Hundreds of people died.

SEE ALSO: Here's how you can check on the Texas grid in real-time
EMBED More News Videos