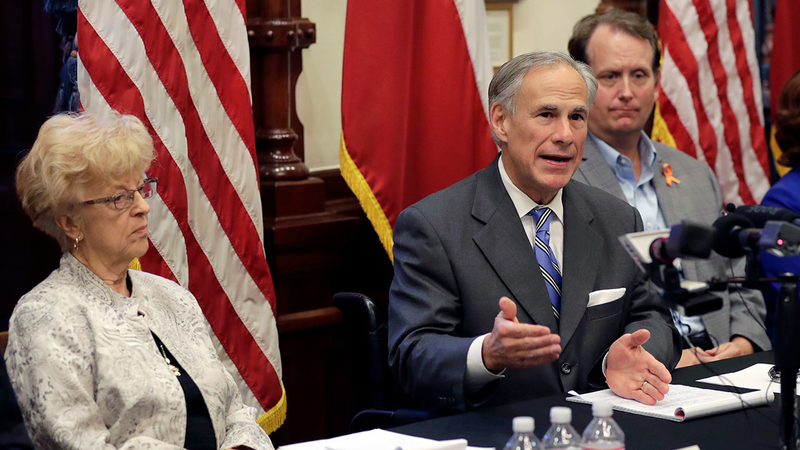 Speaking at a news conference on Saturday, Abbott told reporters, "I can tell you that perhaps the most profound and agreed upon issue that came out of all of those hearings (after the Santa Fe school shooting) was the need for the state and for society to do a better job of dealing with challenging mental health-based issues."

A check on the Texas record, using data from Mental Health America, shows the state is not improving access to mental health care since Abbott took office in 2015.

The national study released every year suggests Texas ranks 43rd out of 51 states (including Washington, D.C.) in 2019 in the need for mental health care and access to it.

Dr. Neal Sarahan, the executive director of the National Alliance on Mental Illness Greater Houston, tells ABC13 Investigates the state "is making significant investments in mental health," but it is not enough and it "leaves us far behind in adequately meeting the needs and safety of our citizens."

There are more mentally ill Texans without access to insurance coverage than in any other state in America.

Mental Health America's study shows a third of all mentally ill Texans go without treatment due to cost.

Despite the rankings, Renae Vania Tomczak, president and CEO of Mental Health America of Greater Houston, told ABC13 Investigates she, "sees an encouraging trend of increased awareness and investment from our state and local elected officials to improve access to mental health care. For example, an overwhelming majority of legislators on both sides of the aisle voted to pass bills in this last session that will promote prevention and early intervention for children's mental health in Texas."

In 2019, the Texas legislature passed and Abbott signed several bills related to mental health. In the wake of the May 2018 shooting at Santa Fe High School, many of the new laws center around prevention and early intervention in Texas schools.

Both Vania Tomczak and Sarahan emphasized the importance of early intervention in the treatment of mental illness.

"Mental illness, like all illnesses, is best treated early. More resources and access in primary care settings will pay many dividends in the future health of our citizenry," Sarahan said.

Have a tip for Ted Oberg? A problem to solve? Get in touch with us on our tip page, or send a tip below. (On mobile? You can open our form by tapping here.)
Report a correction or typo
Related topics:
ted oberg investigatesel paso shootingshootingshooting rampage
Copyright © 2022 KTRK-TV. All Rights Reserved.
TED OBERG INVESTIGATES
Harvey victim finally gets help 1,600 days after the storm
Report: 'Significant reform' needed to improve state foster system
Feds: Slow Harvey aid, left 'Houstonians without the help they needed'
More than 20K HISD students in classes without certified teacher
TOP STORIES
51-year-old on the run as suspect in corporal's ambush killing
Sergeant was to walk daughter down aisle until his hit-and-run death
Mom shares story of son's 'scary' battle with COVID complications
H-E-B's Scott McClelland retirement and what's next
Drying out but staying cool this week
LULAC set to sue Houston City Council for lack of Hispanic members
New security director aims to improve safety for Jewish organizations
Show More
IRS changes you should know before submitting taxes
Cause of death revealed for 23-year-old woman found dead after date
Texas among states suing Google over claim it's misleading consumers
Man accused of stabbing K-9 in The Heights now charged
'We knew something big exploded': ABC13 recalls moment of Watson blast
More TOP STORIES News