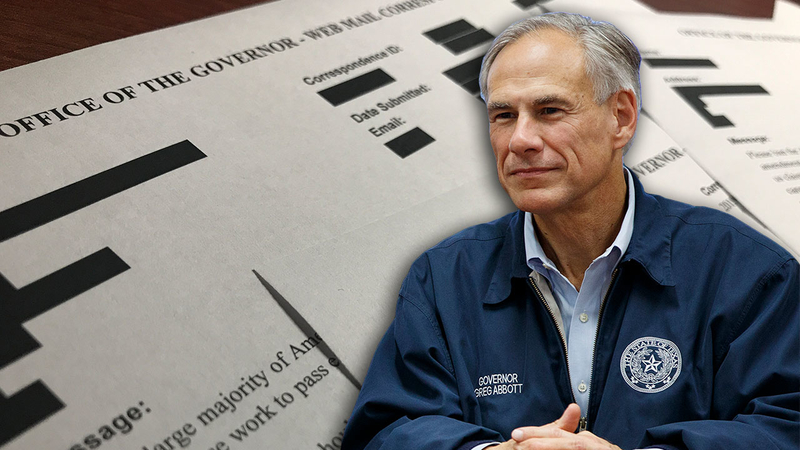 AUSTIN, Texas (KTRK) -- Following mass shootings last month in El Paso and Dayton, Ohio, hundreds of Texans wrote to Gov. Greg Abbott demanding action, some calling him a "coward" and saying "this blood is on your hands as much as the shooters."

A majority of the emails were from disappointed and frustrated Texans calling on Abbott to take more action, but a few did thank him for visiting El Paso and his support of gun rights.

The El Paso shooting that killed 22 people at a Walmart on August 3 marked the fourth since Abbott took office. Since then, a fifth shooting claimed the lives of seven people in Odessa on August 31, when a gunman went on a shooting rampage using an assault-style rifle he obtained through a private sale.

After the El Paso shooting, 13 Investigates asked Abbott's office for emails related to the incident. We found more than 500 people wrote to the governor days after the shooting, including lifelong supporters vowing to never vote for another Republican "as long as there is no sensible gun control." Abbott's office expects to release more emails on Monday.

13 Investigates removed the names, phone numbers and addresses of individuals who wrote to Abbott following the El Paso shooting.

Read the emails sent to Governor Abbott - on a mobile device? Click here to open.


There's been at least one mass shooting in Texas every year since 2016, when five victims died in an ambush on police. Another 26 victims, including an 18-month-old child, were killed during a shooting at a church in Sutherland Springs in 2017. Ten more people were killed when a gunman opened fire at Santa Fe High School in 2018. And, the El Paso and Odessa shootings this year have killed 29 people total.

It wasn't until this week - more than a month after the mass shooting in El Paso and five days after a deadly shooting in Odessa - that Abbott issued eight executive orders "to help prevent further mass shootings by enhancing reporting requirements and ensuring law enforcement and the public have the training, tools, and resources they need to provide and respond to Suspicious Activity Reports."

Abbott formed a Domestic Terrorism Task Force in the wake of the El Paso shooting, but he hasn't called for a special session. The legislature won't meet again until 2021.

One woman in Houston said she's scared for her daughter, who works at a local college and has had gun-carrying students come to her office upset with their grades. Another resident in Katy called on the governor to ban AK-47 and assault weapons from private citizens, saying gun stores in Houston are "robbed all the time and the guns get into the hands of criminals."

Abbott acknowledged the mother of the alleged El Paso shooter reached out to law enforcement with concerns about her son and the Odessa shooter called local and federal authorities before his shooting spree.

In a statement issued on Thursday, Abbott said his executive order is meant to prevent further mass shootings by trying to close the information gaps when a suspicion of a potential shooting arises.

"I will continue to work expeditiously with the legislature on laws to keep guns out of the hands of dangerous criminals, while safeguarding the Second Amendment rights of law-abiding Texans," Abbott said in a statement.

Many of the orders will go into effect within the next month, including one that requires the Texas Department of Public Safety to develop a standardized intake process used by Texas law-enforcement agencies that will help officers "better identify whether a person calling the agency has information that should be reported to the Texas Suspicious Activity Reporting Network."

The order also calls for a public awareness campaign so members of the public are more likely to report information on potential gunmen who might be their friends, family, co-workers, neighbors or classmates.

Some of the individuals who reached out to Abbott following El Paso outlined specific steps they'd like to see Abbott taken, such as regulating the sale of ammunition and banning bump stocks, stricter background checks and not allowing people convicted of domestic abuse to own guns in addition to allowing law enforcement or family members to petition the court to prohibit someone from owning a gun if they pose a risk to themselves or others.

On Wednesday, Texas Speaker Dennis Bonnen appointed 13 members to a House Select Committee on Mass Violence Prevention and Community Safety. It will be tasked with finding ways to strengthen enforcement of current laws that prevent felons from obtaining firearms as well as "assess challenges to the timely reporting of relevant criminal history information and other threat indicators to state and federal databases."

The committee will also examine the role of digital media and technology when it comes to threat detection, reporting and prevention and identify ways to improve the exchange of information between federal, state and local authorities as well as intervention of mental health professionals.