The El Dorado Fire has grown to 7,050 acres as of early Monday morning and containment is listed at 5%.
KTRK
By Marc Cota-Robles 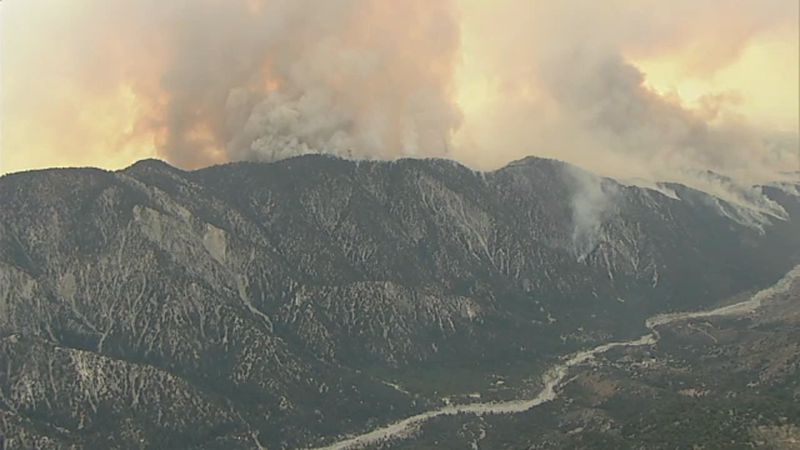 The El Dorado Fire burning in San Bernardino County was caused by "a smoke generating pyrotechnic device" used during the party in El Dorado Ranch Park, according to the Cal Fire San Bernardino Unit.

"Cal Fire reminds the public that with the dry conditions and critical fire weather, it doesn't take much to start a wildfire," the agency said in a press release. "Those responsible for starting fires due to negligence or illegal activity can be held financially and criminally responsible."

Family members inadvertently made a deadly pipe bomb while experimenting on a gender reveal.

The El Dorado Fire erupted Saturday before 10:30 a.m. and as of early Monday morning, the containment is listed at 5%.

Gov. Gavin Newsom declared a state of emergency on Sunday for five California counties as dozens of fires are burning amid record-breaking temperatures.

Time lapse video taken over 15 minutes on Saturday shows the El Dorado Fire quickly exploding from 25 to 400 acres as thick smoke plumes tower over the Yucaipa area. As of Sunday morning, the blaze was over 2,700 acres.

Evacuations were ordered, and more than 500 personnel were battling flames, along with 60 engines, three fixed-wing aircraft and six helicopters, according to the San Bernardino National Forest.
No injuries have been reported. Officials did not immediately release details on structural damage.

California has seen 900 wildfires since Aug. 15, many of them started by an intense series of thousands of lightning strikes. The blazes have burned more than 1.5 million acres. There have been eight fire deaths and nearly 3,300 structures destroyed.

The heat wave was expected to spread triple-digit temperatures over much of California through Monday. Officials urged people to conserve electricity to ease the strain on the state's power grid.