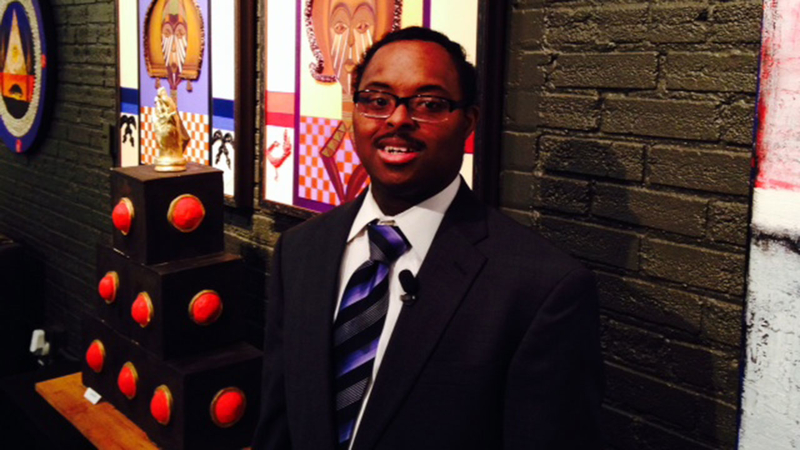 A father's love, a student's perseverance

HOUSTON (KTRK) -- Some miracles happen in a minute. For Alvin Roy and his son, their miracle happened over 26 years, and this weekend it will come to fruition.

One other thing about Ezra. He was born with Down Syndrome, and doesn't verbally communicate in a language most people can comprehend.

Ezra's remarkable story is made possible by his father, Houston artist Alvin Roy. Born and raised in 5th Ward, Roy was on TSU's renowned debate team, and studied as an artist.

When he and his wife had Ezra, life changed. The child's mother, Roy says, left before Ezra was 2. He went to law school, working for attorneys as he studied. "I realized law was my day job, when my real job was taking care of my son."

Roy took the role seriously. "My grandparents told me you take responsibility for what you do, good, bad or indifferent. And Ezra was mine."

It wasn't a burden for Roy, but a joy. He returned to art, painting at his easel with Ezra clutching his leg.

That's when it started. Slowly, Roy said, Ezra began recognizing colors. His father studied his son's movements, his body language, to better communicate with him. The two developed their own language.

Then Ezra began creating his own art.

It's been a long process. Ezra may not be able to speak in ways most of us understand, but his cognitive ability, his intelligence is high enough to get him into college.

With the assistance of a translator, he made it through TSU's fine arts program, not as a special ed student, not by being given a grade, but by hard work and study. And always with his father looking on.

Ezra is the first Down's Syndrome student to earn a 4 year college degree at TSU. He may be one of the few, if not first, in the nation.

For Alvin Roy, it is a joyous milestone, which he celebrates with tears in his eyes.

"Anyone who doesn't believe in God, " he says, "hasn't seen this- how far he's come. I call it a triumph... we've always been together like glue."

Ezra Roy will receive his diploma Saturday at TSU. And the father who loves him, who made it possible, will be in the audience, looking on, with more tears in his eyes.