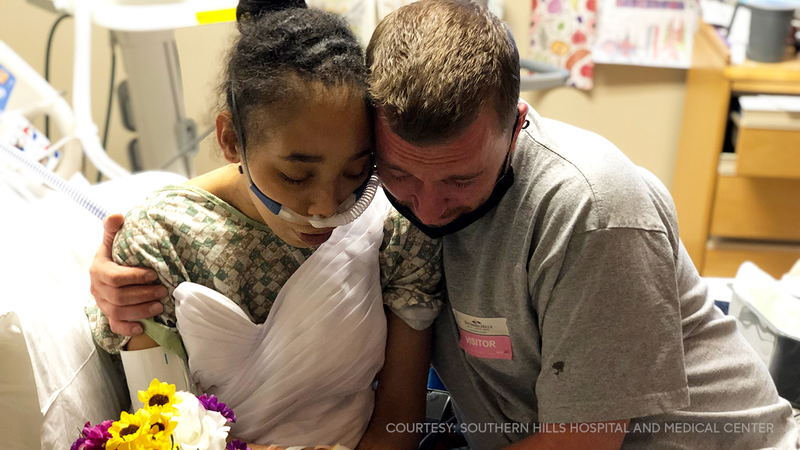 LAS VEGAS, Nevada -- A hospital setting and a patient gown aren't usually ideal when it comes to weddings.

But for Alysia and her boyfriend Daniel, it was exactly what they needed to fulfill their wish.

This past week, Southern Hills Hospital and Medical Center in Las Vegas, Nevada, posted on its Facebook page Alysia's story. About a month ago, the 33-year-old mother of three children found out she had leukemia.

Given the devastating news, Alysia's condition got to the point that she required admission into the hospital ever since.

This past week, the hospital said Alysia expressed that she wanted to get married to her boyfriend Daniel, whom she has been with for the better part of the last year.

Her wish resonated with people on social media. Dozens of people offered to help give her the wedding she wanted, complete with rings, dresses, a tuxedo and makeup.

The hospital said, however, her condition prevented her from going outside the facility, especially with the local marriage license bureau requiring both bride and groom to appear.

Instead, Southern Hills, which was able to iron out the wedding license situation, held the couple's ceremony last Wednesday inside Alysia's room, with a priest, a few nurses, and the couple side-by-side while sitting on the edge of her bed.

You can view Alysia and Daniel exchange vows in the video above.

This morning Alysia told us her dying wish was to marry Daniel. Six hours later we helped make that happen. We are sending our love and prayers to both of them. #carelikefamily @HCAhealthcare pic.twitter.com/KCkYiQifg6

While seeing Alysia fulfill her wish to marry has been heartwarming to those following her story, there remained the reality of her prognosis. The hospital said it had to move the wedding a day earlier because of her condition, and according to the couple's GoFundMe page set up by the groom, his bride, now Alysia Anzalone, was airlifted an hour after the ceremony to a cancer center in Utah, awaiting a bone marrow donation.

The fundraising page states Daniel was laid off in the wake of the pandemic and that he wants to take care of Alysia's kids, whom he unofficially adopted.

"She made me a better person," Daniel wrote. "I am heartbroken and at a loss for words. I pray to God every day she beats this."

Donations to Alysia and Daniel can be made on their GoFundMe page.

Due to the novel coronavirus, a wedding in Little Rock, Arkansas had to be postponed. So instead of letting the flowers she ordered go to waste, the bride used them to spread joy.

A touching video out of California shows a mother ringing the cancer-free bell with her infant daughter.

A Charlotte Navy veteran is battling brain cancer and her husband is showing his love by comforting her with serenades.

Frank Calderon honored the grandmother who raised him and her breast cancer battle in a viral video.

A group of Northern California kids aren't even in kindergarten yet and they're already learning to give back.