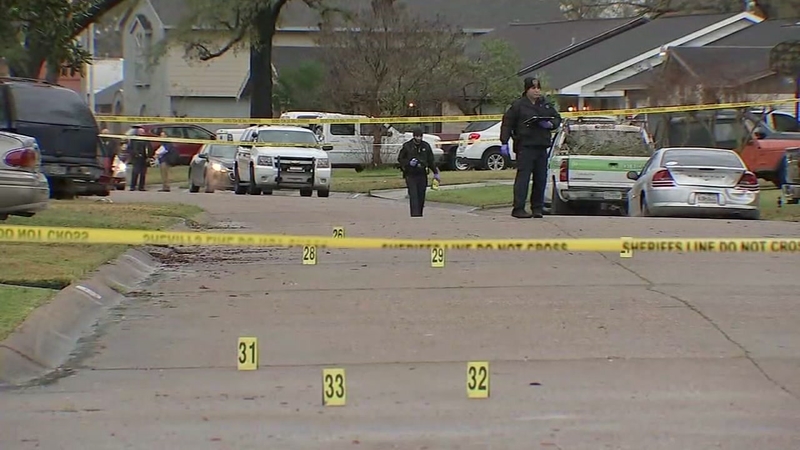 Man shot and killed inside home

HOUSTON, Texas (KTRK) -- Deputies say a shooting that left a man dead inside his own home overnight in east Harris County may be gang and drug-related.

More than 10 hours after shots were fired on Duncannon Drive and Seven Hampton Lane, yellow police tape is still wrapped around five blocks. At least 30 homes were part of a crime scene.

"We're trapped in our home. We can't get out," said Janis Smith.

Smith says she heard several shots, and around 2 a.m., a deputy rang her doorbell.

"I'm like what's going on? I was asleep and they explained what happened," Smith said.

FOUR HRS LATER and Duncannon Dr still looks like this: crime scene tape at all ends. A man was shot and killed in his home. Investigators say it’s likely gang and drug related. #abc13 https://t.co/nOzf4s8cIH pic.twitter.com/u38QJC4lhy

Around 12:50 a.m., officials responded to a call of shots fired in the 14200 block of Duncannon Drive in the Woodforest subdivision.

When deputies entered the home, they found a 20-year-old Hispanic man dead from a gunshot wound. Investigators say he was robbed, then a shootout happened outside the house.

People inside two vehicles, a white Chevrolet Impala and a red four-door sedan, were driving up and down the street shooting at each other.

"We don't know exactly who was shooting at who, but we believe it was drug-related and possibly gang-related," said Sgt. Ben Beall with the Harris County Sheriff's Office.

Beall said there were four to six people involved in the shooting using as many as four different types of guns. No one is in custody.

Detective says home of man shot, killed has surveillance cameras—that recorded the shooting. No one in custody. Detective says he’ll give an on cam update soon... #abc13 https://t.co/nOzf4s8cIH pic.twitter.com/vHhVu4OYV8

A few feet from Smith's front door, investigators collected evidence: more than 40 shell casings, a high-powered rifle dropped in the middle of the street, and one baby blue Nike shoe.

A couple blocks away on Waterville, deputies found a second man who was shot in the leg. He was taken to a hospital.

He spoke with investigators who said he told them that he and his friend were caught in the gunfire, but had nothing to do with the deadly shooting.

Officials tell ABC13 there was also a crash on Duncannon that was related to the shooting. However, they're working to figure out exactly how the two are connected.

Eyewitness News viewer Alexis Silva says her car and her dad's truck parked outside their home were hit in the crash. Her family was not hurt.

"It's scary. My son plays basketball right there on that driveway. You're waking up at 2 a.m. because of gunfire and death," Smith said. "You're in a middle class, homeowners association neighborhood, you would never think anything like this would happen."

“Being close to New Year’s, I thought it was fireworks.” But then Janis Smith woke up to find shell casings, a high powered rifle and a baby blue Nike shoe strewn across the road in front of her house. Those weren’t fireworks. They were 30-40 shots. #abc13 https://t.co/nOzf4s8cIH pic.twitter.com/aRlGnHPE4j