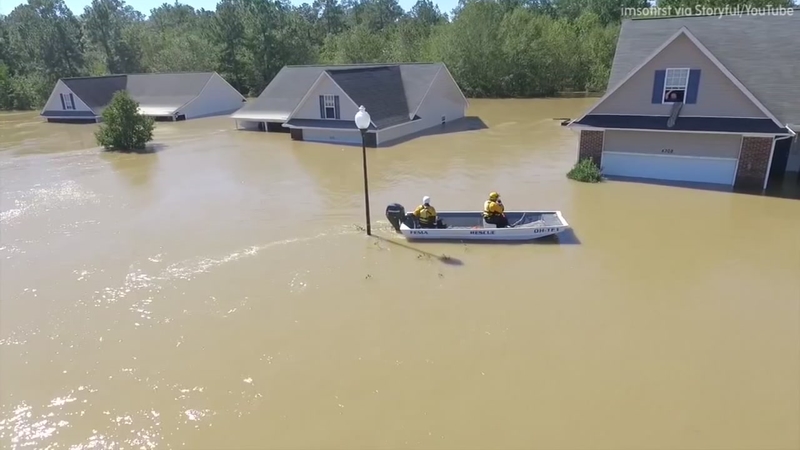 A stranded veteran and his dog were rescued from Hurricane Matthew flooding in North Carolina with the help of a drone and social media.

Craig Williams of Austin, Texas, was concerned for his brother Chris Williams, who was stranded on the second floor of his home because of flooding in Hopes Mills, North Carolina.

Chris Williams, a Navy veteran, was with his dog, Lana, who did not know how to swim. He began calling for help, only to find that emergency services were down in the area.

When Chris Williams was unable to find help, he contacted his brother hoping he would have more luck.

Craig Williams began searching Twitter to find information on when the flood waters might subside. To make light of the situation, Craig Williams sent a photo to his brother showing homes submerged in water.

"I saw this incredibly devastated neighborhood, where you couldn't see anything, just the rooftops," Craig Williams told ABC News. "Then I sent it to him as a joke and was like, 'Well, at least it's not as bad as this.' And he said, 'That's my house.'"

Hey @ABC11_WTVD you won't believe this! My brother has been trapped by the flooding w/ his dog @ImSoFIRST happed to post a pic of his house

Craig Williams immediately contacted the photographer, Quavas Hart, to find help for his brother. Hart was able to alert a nearby Federal Emergency Management Agency rescue crew to save Chris Williams and Lana.

"You see a lot of negative things and you hear a lot of awful stuff, but the reality is there are a lot of good people in this world and if you just ask, they will do the right thing," Chris Williams said. "This is one of those moments when humanity came together."

.@ABC11_WTVD @ImSoFIRST you saved my brother and his dog, next time I'm over there I owe you a beer or two :)