'Disney on Broadway: Live at The New Am' concerts aim to revive NYC theater 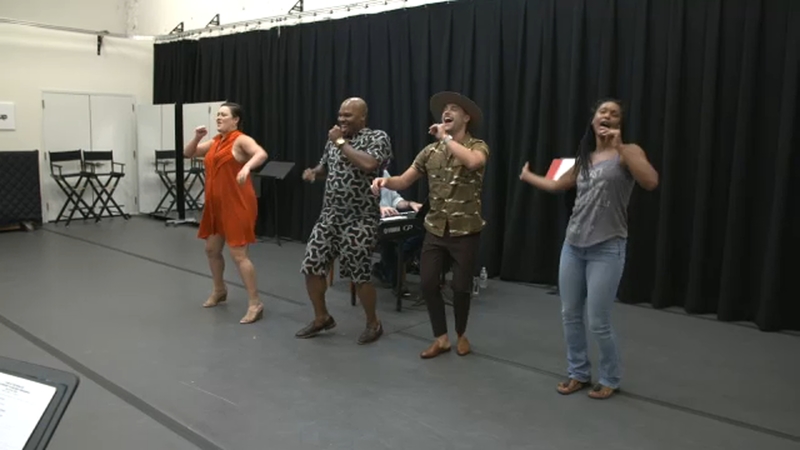 'Disney on Broadway: Live at The New Am' to revive NYC theater

NEW YORK -- There is more evidence Manhattan's Theater District is slowly coming back to life, as the best tunes from Disney's musicals are featured in four concerts called "Disney on Broadway: Live at The New Am."

The title references the New Amsterdam Theatre on 42nd Street, which is where I went this week to learn more.

There are four performances in total starting on Thursday, July 22, featuring the most-beloved hit songs from Disney's Broadway shows -- including "Beauty and the Beast," "A Whole New World," "Circle of Life," and "Let it Go" -- as performed by Disney on Broadway stars Ashley Brown (Mary Poppins), Michael James Scott (Aladdin), Kissy Simmons (The Lion King) and Josh Strickland (Tarzan).

Famously, "the show must go on," but it took a while before that old saying could be true again on Broadway after the longest shutdown in its history.

Disney on Broadway has announced a four-show "Live at the New Am" benefit concert for The Actors Fund.

It's no wonder Scott was so excited when I caught up with him right after his first rehearsal in 17 months.

"When we all got to see each other for the first time, there was a lot of emotion, a lot of tears," he said.

After all, theater is a group activity that depends on collaboration, which hasn't been possible for almost a year and a half, so any reunion was bound to be emotional.

"It is crazy excitement." Scott said. "We are all just kind of in disbelief that we're actually getting to re-open the New Amsterdam Theatre."

It's the same theater where Scott was playing the Genie in Disney's "Aladdin" when the pandemic forced his show and all the others to close.

"(Broadway) is coming back," he said. "You can actually feel it around the city, the people, they know it's coming back."

He's not back in rehearsal for "Aladdin" -- not yet, at least -- but Scott is brimming with enthusiasm for the upcoming series of concerts.

"It's just the intimacy of the music and us being right there in front of you on a Broadway stage," he said.

Disney+ subscribers got the chance to participate in a special watch party with Kevin Feige on Monday night.

The new show resembles the intimate numbers seen at the same theater in November 2019, when Disney Theatrical staged its 25th anniversary show. A replay was streamed last year as a benefit for The Actors Fund, and this is the same charity that will benefit again.

"For me, it feels like some of my soul is back," Scott said.

Disney Theatrical is owned by the same parent company this ABC station.

CLICK HERE for complete details and a description of safety protocols for Disney on Broadway: Live at The New Am.