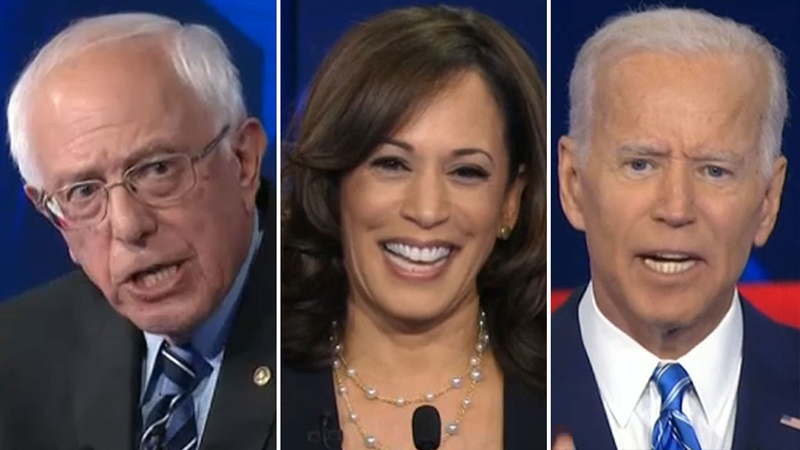 MIAMI, Florida (KTRK) -- For the second time in two nights, 10 Democratic contenders for the party's nomination for president took center stage in Miami.

Like night one of the first Democratic debate, it had its moments.

"Joe Biden was right when he said it was time to pass the torch to a new generation of Americans 32 years ago," Rep. Eric Swalwell said of the former vice president. "He is still right today."

Sen. Bernie Sanders got fired up Thursday night over billionaires and special interests.

"Who has the guts to take on Wall Street?" Sanders said. "To take on the fossil fuel industry? To take on the big money interests who have unbelievable influence on the political life of this country?"

.@BernieSanders calls @realDonaldTrump a phony, a fraud, and a liar #Democrats #DemDebate2

At times, it was hard to get a word in edgewise.

"Hey guys, America does not want to witness a food fight, they want to know how we're going to put food on their table," Sen. Kamala Harris quipped.

But unlike night one, four of the top five current Democratic front runners took part.

"Those who come seeking asylum, we should immediately have the capacity to absorb them and keep them safe until they can be heard," Biden said.

"You should be able to live well, afford rent, be generous to your church and Little League, whether you went to college or not," Mayor Pete Buttigieg said. "That's one of the many reasons we need to raise minimum wage to at least $15 per hour."

A high stakes political contest is just now getting underway.

ABC13's Tom Abrahams caught up with some of the candidates in the spin room moments after the debate.

ABC13's Tom Abrahams spoke to some of the presidential candidates in the spin room after the debate.