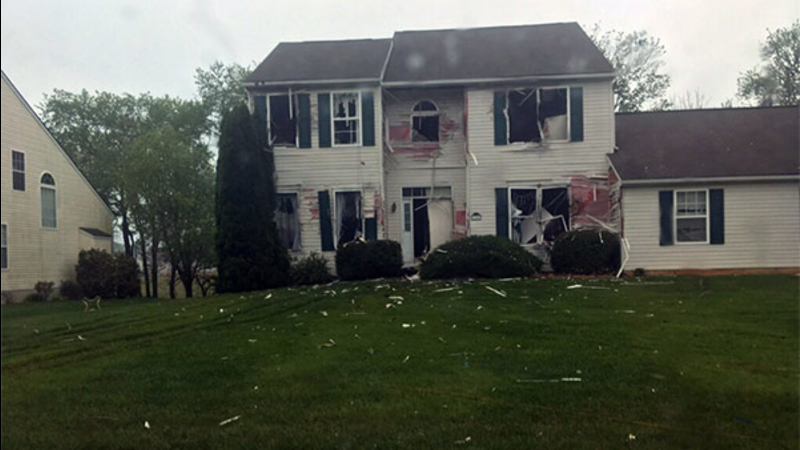 Standoff with trooper murder suspect over

MIDDLETOWN, Delaware -- Delaware State Police confirm to Action News that the standoff in Middletown, Del. with the suspect in the murder of a Delaware state trooper is over, and that the suspect is dead.

At 9:17 a.m., the male suspect exited the residence and engaged police. The suspect was then shot by law enforcement. He was pronounced dead at the scene at 9:29 a.m....
Residents in the area remain evacuated. The Odessa Fire Company, located at 304 Main Street in Odessa, has opened its facility to temporarily house the evacuated residents of Brick Mill Farms Development.

More information is expected to be released at a news conference early Thursday afternoon.

Stay with Action News and 6abc.com for more details as they become available.

THIS IS A BREAKING NEWS UPDATE. Earlier updates below.

An active standoff continues in Middletown, Del., as authorities work to arrest the suspect in Wednesday's fatal shooting of a Delaware State Police trooper.

Residents in the neighborhood surrounding the 500 block of St. Michaels Drive in the Brick Mill Farms Development tell Action News they heard loud blasts through the night.

Resident near standoff: "Some of them are bad, about 4 or 5 have been massive explosions." @6abc

Around 4:00 a.m. this morning, Thursday April 27, 2017, officers once again came under fire from the suspect. Allied agencies explosively breached numerous windows but have not entered the residence. Multiple Special Operations Response Teams and Conflict Management Teams from allied police agencies are attempting to make contact with the male subject and are continuing to attempt to persuade him to surrender. Residents in the area remain evacuated.... There are no reported injuries.

It is believed that the male suspect is inside the home by himself.

Couple brings food over to evacuated residents who've spent night in their cars as stand off continues @6abc pic.twitter.com/IuqH4qBGl7

He later succumbed to his wounds.

THIS IS A BREAKING NEWS UPDATE. Earlier story below.

Delaware state police have released the identity of a trooper who was shot and killed at a Wawa convenience store in Bear.

He has been identified as Cpl. Stephen J. Ballard.

Ballard, 32, was an 8.5-year veteran of the Delaware State Police and was assigned to patrol at Troop 2, Glasgow.

Meanwhile, the suspected shooter has barricaded himself inside his home in Middletown.

Video from the Action Cam at the scene in Bear, Del.
EMBED More News Videos

The barricade situation is happening at a home on the 500 block of St. Michaels Drive in the Brick Mill Farms Development.

Police say the male suspect is refusing orders to surrender and has fired shots at officers.

It is believed that he is inside the home by himself. Hostage negotiators were trying to establish contact with the man.

Delaware State Police say at 8:22 p.m., the Explosives Ordinance Disposal Unit utilized an explosive breeching charge on the front door, however, they have not entered the home, as of yet.

The suspect's name has not been released.

Earlier in the day, heavy police presence could be seen from the Action Cam and Chopper 6.

Residents in the area have been evacuated. No injuries have been reported.

The Odessa Fire Company, located at 304 Main Street in Odessa, has opened to house the evacuated residents.


The trooper was shot around 12 p.m. Wednesday at the Wawa store on Pulaski Highway (Route 40) near Salem Church Road.

Ballard made contact, officials say, and then there was a struggle.

That's when one of the two suspects got out of the vehicle and fired several rounds, striking Ballard.

Kevin Lerner says he saw the shooting. He works at the barber shop next to Wawa.

"When he pushed the officer he got a little room to run. So he pushed him and ran, and when he ran he ran for like seven or eight feet. And then he turned around and started shooting," said Lerner. "Just instantly started shooting."

State Police announce the death of a trooper during a press conference on April 26.

Responding troopers arrived at the scene and took one of the suspects into custody without incident.

The other suspect fled on foot prior to their arrival.

Cpl. Ballard was rushed to the hospital where he succumbed to his injuries.

A caravan of law enforcement vehicles accompanied the slain officer's body to the state Division of Forensic Services for an autopsy, and observers placed their hands over their hearts as it passed by.

Raw video: The Action Cam was there for the dignified escort for a fallen Del. State Police trooper.

Delaware Gov. John Carney is offering his condolences to the relatives and colleagues of a slain state trooper.

My heart is with our fallen Delaware State Trooper's family and the officers who have served beside him. pic.twitter.com/THioxF8nCh

The governor issued a statement after the trooper's death was announced at a hospital in Wilmington. He says his "heart is with the officer's family and the officers who have served beside him."

Carney says "officers go to work every day knowing they put their lives on the line to protect ours." He says Delawareans are "incredibly indebted to their bravery and service."

Wawa officials released a statement Wednesday night saying, "We are deeply saddened by the tragic situation that occurred in the parking lot of our Bear, Delaware store today. Our hearts are broken and our thoughts and prayers are with the officer's family and the entire Delaware State Police community during this difficult time."

The statement notes that the store will remain closed until Saturday "Out of respect to the officer, our associates and all those affected."

Police are responding to a reported shooting at a Wawa in Bear, Delaware.

Police are responding to a reported shooting at a Wawa store in Bear, Delaware.