Mother killed when tire flies off truck and through her windshield 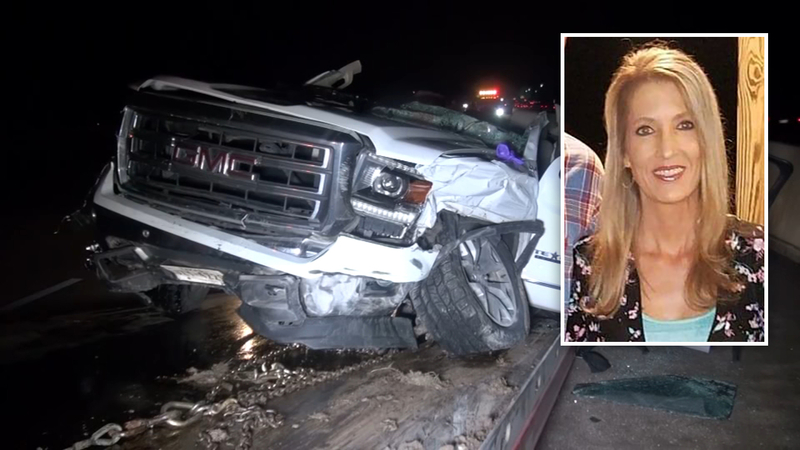 Mom killed when wheel flies off truck through her windshield

NEW CANEY, Texas (KTRK) -- A mother was killed when a wheel flew off another vehicle and into her windshield as she was driving on the Eastex Freeway on Thursday night in New Caney.

The accident happened around 7:15 p.m. on the freeway near Roman Forest Boulevard.

According to authorities, 52-year-old Carol Hardy of Hockley and her 19-year-old son Cayden were on the way home from the teen's baseball game in Lufkin.

They were traveling in a white GMC pickup in the southbound lanes when a tire and wheel from a Dodge pickup truck in the northbound lanes flew off, went over the highway concrete barrier, and hit the mom, who was killed instantly.

Her son was asleep in the front passenger seat at the time of the wreck. He went to the hospital with a hand injury, but is now back home.

The incident caused Hardy's truck to also hit a nearby Buick. That driver has also been released from the hospital.

While the crash is still under investigation, mechanics say if your wheel is about to come off, you should know it.

"You'll have slop in the steering wheel, you turn the wheel and the car is not responsive or in the case of the hub bearing you'll have a noise. It gets quite loud," said Mike Poutous, Poutous Collision and Mechanical. "Also, while it's failing, before it gets to the point where it falls off the car, you also lose braking ability."

The 16-year-old driver of the truck that lost the wheel was not hurt. No charges have been filed at this time.

As for Hardy, her friend described her as the sweetest person she ever met.

Her family has started a GoFundMe to help with the expenses.

While this may seem like a freak accident, this has happened many times before on Houston highways.

In 2017, 738 people died because of tire-related crashes, according to the National Highway Traffic Safety Administration.

The National Transportation Safety Board reports that more than 19,000 people are hurt every year, but adds that most of these crashes are preventable.

Here are some things you can do.

Jake Tabor was desperate for help and told dispatchers, "I need to call my wife, tell her I love her."

The man driving told police he turned his wheel to the right but the truck kept going straight.