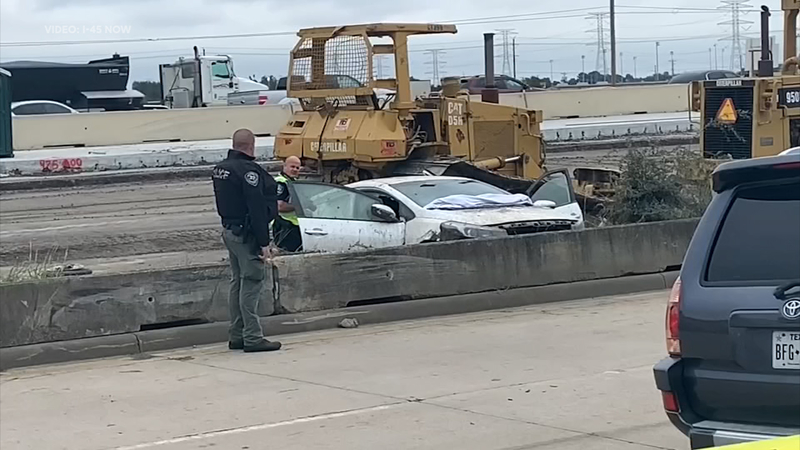 LEAGUE CITY, Texas (KTRK) -- League City police have arrested a 19-year-old woman they believe stole the truck of a good Samaritan who had stopped to help others.

Police said Keniqua Pleasant, from La Marque, has been charged with failure to stop and render aid and unauthorized use of a motor vehicle.

On Wednesday, at about 1:15 p.m., a vehicle exiting I-45 near Butler hit another vehicle, shoving that vehicle onto the feeder road into the path of oncoming traffic. Police said the vehicle was then hit by another driver traveling on the feeder road, vaulting it over the concrete wall and into the median where it hit a bulldozer in a construction zone.

Police said Pleasant initially stopped, as her vehicle was damaged. Another driver stopped to help by calling 911. That's when police said Pleasant allegedly jumped into the good Samaritan's truck and drove off. She was located and brought in for questioning a short time later.

The stolen truck was found abandoned on Bay Area Boulevard near the Gulf Freeway.

Authorities say the driver of the vehicle that was rear-ended and pushed onto the feeder road died. He was identified as Jeremy Campbell, of League City.

Fatal crash in @LeagueCityTX has the I-45 SB frontage road at SH 96 closed. This includes the exit ramp to SH 96. Use caution in the area. pic.twitter.com/DnPcxctpMd