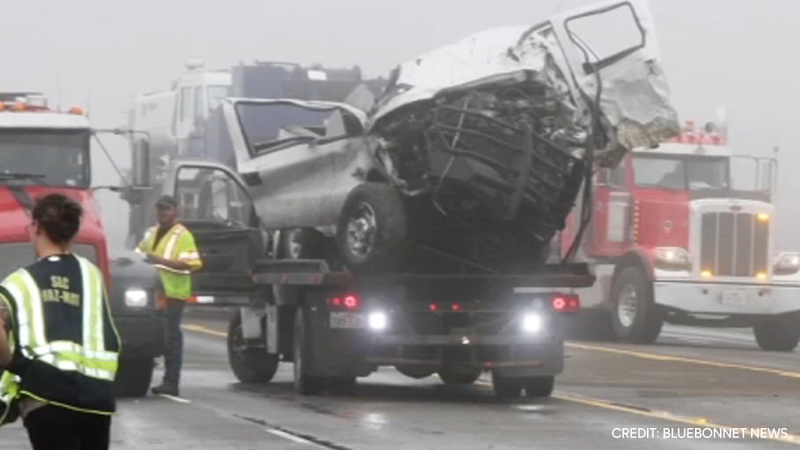 DAYTON, Texas (KTRK) -- Three men heading to work were killed after a driver swerved into the wrong lane in Dayton, according to police.

As word spread through the small city in Liberty County of the horrific crash scene, one man had a bad feeling.

"I was calling the guys a few times, and nobody answered," Eidan Gano recalled.

After several attempts, he heard a voice he didn't want to hear.

"The police department answered and told me the news," Gano recalled.

Monday morning, four people were killed on Highway 146. Officers said a person driving a stolen truck, identified as 25-year-old Blaine Springer of Houston, crossed into the other lane, hitting another truck head-on.

The impact killed the men in the other vehicle, who were simply three men heading to work.

"We pour concrete," Gano explained. Gano is their supervisor, and he spoke with ABC13 by phone.

This wasn't an easy interview. Today, I spoke to the family of a man killed in a wreck in Dayton. Alfredo Cuellar is from south Texas, but was in the Houston area working trying to make a better life for his family. More from this emotional interview on @abc13houston at 5pm. pic.twitter.com/BuGQkb7Ya5

Cueller's uncle, Matias Serrata, was emotional when he spoke with ABC13 about the wreck.

He said his nephew had dreams of taking part in barbecue cook-offs and buying a big home for his family.

"He would give you the shirt off his back," Serrata recalled. "I know that's a term you use so much, but literally, he would. He was just that kind of person."

Cueller leaves behind a wife, three children, and a grandchild. He was better known as Gorde.

As for the wreck, Dayton police are still investigating. They aren't sure what caused Springer to cross into the other lane.