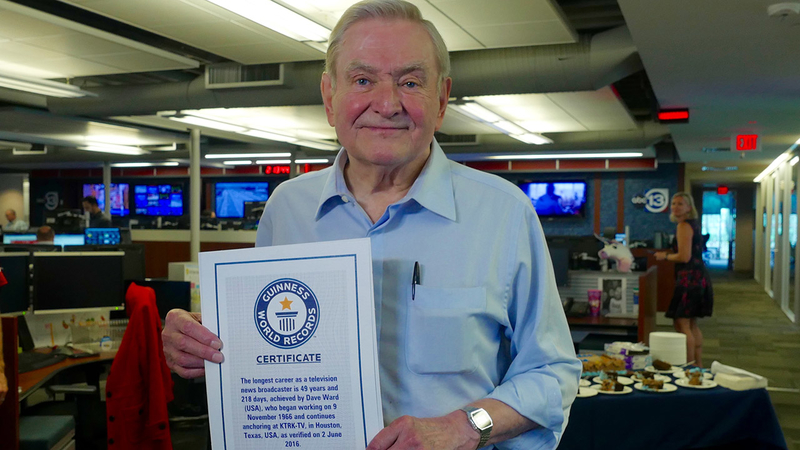 HOUSTON (KTRK) -- ABC13 anchor Dave Ward was recognized by the Guinness Book of World Records as the longest running local TV news anchor in the world at the same station in the same market.

"I love this city," said Ward. "I love the people in it. It's a big city, but it has a very neighborhood feel to it and there's no place else I'd rather be."

Ward started working at the station as a reporter/photographer in 1966, and started anchoring newscasts two years later. He is just a few months shy of 50 years at KTRK.
EMBED More News Videos

Dave Ward is in the Guinness Book of World Records!

The entry into the record book, reads:
The longest career as a television news broadcaster is 49 years and 218 days, achieved by Dave Ward (USA), who began working on 9 November 1966 and continues anchoring at KTRK-TV, in Houston, Texas, USA, as verified on 2 June 2016.


"I didn't really set out to make a career out of one television station but that's how it evolved and the strides we've made here paralleled the industry as a whole," said Ward. "I didn't have to go anywhere. I could stay here and experience everything there is in broadcast television."

Over the last five decades, Ward has covered topics from space walks and the Vietnam Peace Talks to natural disasters and politics including a one-to-one interview with President Obama. Behind the scenes, Ward has seen a lot of changes in the industry.

"Going from black and white to color was a big change. We had to change our wardrobe, makeup, everything. Going from radio to television, I had to grow this hair out," said Ward.