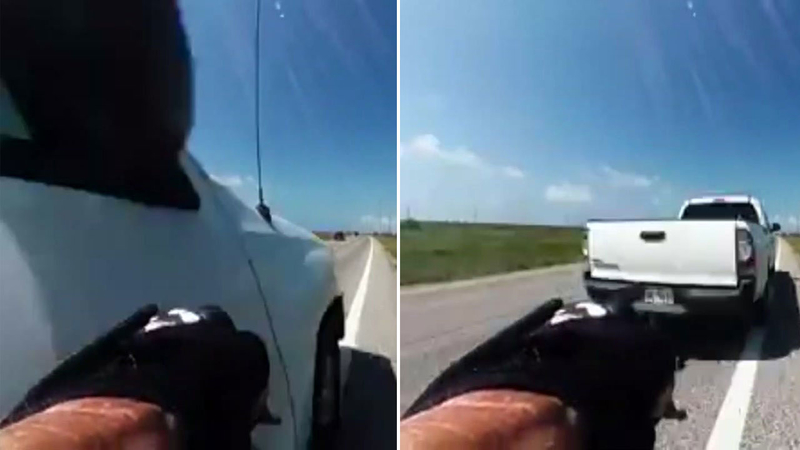 Cyclist nearly knocked off bike by motorist in Galveston

GALVESTON, Texas (KTRK) -- A cyclist in Galveston had a near death experience after a truck was caught on camera inches away from hitting her.

CLOSE CALL: a Galveston cyclist was almost run down by a speeding truck on FM 3005 — now she and her attorney are questioning the City’s lack of bike laws. 🚴🏼‍♀️ I’ll have the live details at 4:30. pic.twitter.com/xrHnmETkOd

The incident prompted the woman to seek legal counseling and question the island's "share the road" policies.

"She felt that she was being targeted, of course. And she felt her life flash before her eyes. Even in the video you hear her gasp with how close the pass was," attorney Charlie Thomas said.

Thomas is representing the cyclist in the viral video. The pair reached out to the Galveston Police Department about the incident, but they say the driver was never charged or cited for the crime.

"About 25 cities in Texas have passed a minimum safe distance. Galveston and the outer Galveston area is not one. At minimum, I think it's time to have the conversation again," Thomas said.

The city of Houston has a bike law that prohibits a vehicle from being within three feet of a cyclist. Galveston currently doesn't have anything on the books.

Even though Galveston doesn’t have an official safe pass law, there are designated lanes all over the island and a “bike network”. 🚴🏻‍♂️ pic.twitter.com/KRdRYPkgm7

Although the cyclist was not hurt or killed, he says she could have been and the driver shouldn't be allowed to get away with this.

"There's absolutely no excuse for why the truck should have been over that fog line and into where she was riding on the shoulder," Thomas said.

In addition to trying to get a law passed, the woman in the video and Thomas are also trying to contact the driver of the truck.