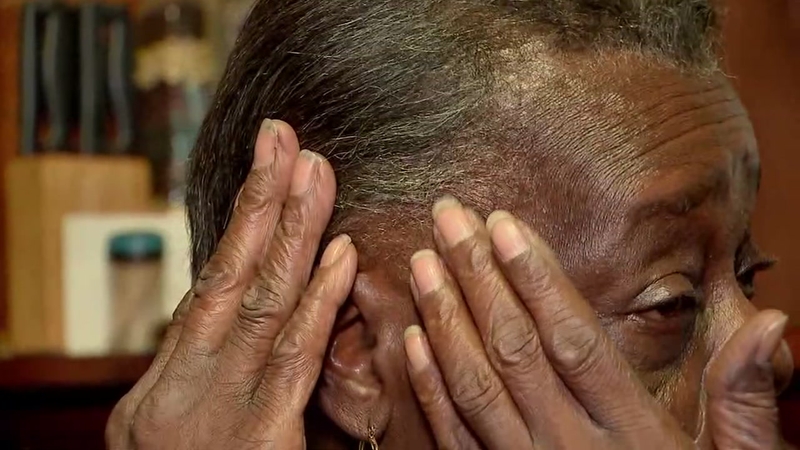 HOUSTON, Texas (KTRK) -- A nightmare scenario played out in real life for a 73-year-old woman and her son in southeast Houston.

The woman, Annie Lynch, says three masked men stormed into their home in the middle of the night and repeatedly pistol-whipped her son.

On Tuesday, Crime Stoppers released details of the brutal home invasion that happened just after midnight on Aug. 26 in the 5800 block of Southridge Street. Eyewitness News spoke to Lynch who said she prayed to God before she was pistol-whipped herself.

According to her, the suspects knocked on their door and her son, who was sleeping on the living room couch, answered. Just as the son opened the door, two of the suspects began fighting with him, repeatedly hitting the man with handguns.

Authorities said the woman heard a noise, and next thing she knew, she saw a shadow in the hall.

Lynch said that suspect grabbed her, dragged her into the living room and pistol-whipped her. A gun was held at her head.

"I felt like he was pulling me into this living room to kill both of us in the living room," said Lynch. "After he put the gun to my head again, I said, 'Oh my God,' and I said, 'help us Lord up in here, what is going on? Take care of all of us up in here.' He hollered (and) he said, 'Shut up.'"

The suspect dragged Lynch back into her bedroom and they left.

She says the masked men got away with money and liquor.

The woman's son suffered severe injuries to his neck. The son was treated and later released from the hospital. Despite leaving the hospital, the man is still wearing a neck brace, according to the woman.

More than three weeks later, she says her home still has reminders of the attack, including blood on the wall and a chunk of drywall missing.

Police said a crime analysis was performed and they did not find any other similar crimes in the area. Crime Stoppers said all three suspects wore a mask and all-black clothing.