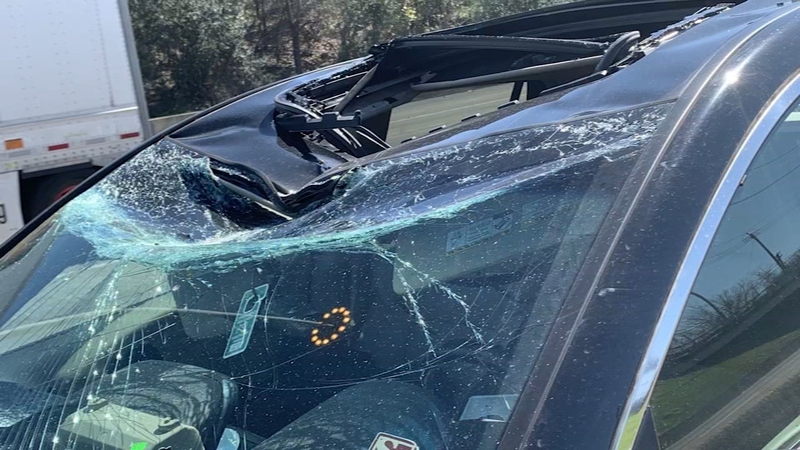 Heavy piece of metal shatters front and back windshield on highway

HOUSTON, Texas (KTRK) -- A Houston driver was alarmed after a large piece of metal totaled her car while she was driving in east Houston.

While traveling on the east Loop near Clinton on Friday, Erica Bell said she recalls seeing the driver in front of her swerve, and then, in a split-second, she saw something flying in the air, headed towards her.

"Never did I think something as nonchalant as running errands would be as impactful and as scary," said Bell.

It took Bell some time to process what happened to her.

"When it hit the car, it hit the top and I could hear the metal then a crash and some glass," she said.

A massive piece of heavy metal busted her sunroof, bounced off and then crashed into the back of her windshield shattering it. It all happened within a matter of four seconds.

"It was long enough for my entire life to stop," she said.

SkyEye was over the scene as she had just pulled over. She said a man in a truck saw what happened and got off the freeway then jumped back on to help her.

"He was the only person that stopped and for that (I'm) grateful. He stayed with me the entire time," she said. "(The object) hit between the driver side and the passenger side. It literally hit in the middle of my car."

Her car is now in the shop but she thinks it might be a total loss. She was almost done paying for it, but looking back, that's the least of her worries.

"I'm very fortunate," she said. "It could have ended a lot different and it happened so fast."