Cracker Barrel shooting suspect had 2 felony warrants out for his arrest, records show 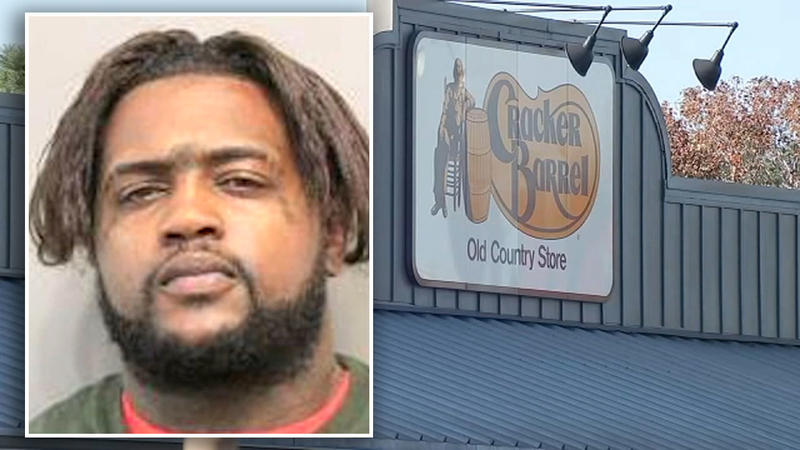 Cracker Barrel shooting suspect was out on bond, records show

According to court records, Humphrey was out on bond for a misdemeanor and had two open felony warrants out for his arrest since August. Humphrey, who has a lengthy rap sheet, was charged four times in August alone. ABC13 obtained a mugshot from a previous charge in 2019.

Court records show his most recent charges involved the mother of his children. Records indicate she told a deputy that Humphrey broke into her apartment through a bedroom window and struck her in the legs. She alleges he took her phone and would not let her leave until she managed to get away and call 911.

On Saturday morning, Baucom was shot and killed while deputies said she was protecting another employee from being robbed outside Cracker Barrel.

Witnesses and surveillance footage of a Dodge Charger, led the Harris County Sheriff's Office to a suspect, which ABC13 learned was Humphrey.

According to the sheriff's office, they determined he was armed and dangerous. While they continued their investigation into the Cracker Barrel shooting, authorities reached out to the warrants division to locate the suspect, and arrest him on his two open felony warrants.

On Monday, after conducting surveillance all day, authorities located Humphrey walking on foot in the 17700 block of West Lake Houston Parkway.

"They watched him walk down the roadway and they got out of their vehicle to approach him on foot, they called his name, he began running from them, and as they were chasing him, he made some gestures as if he was pointing a weapon at them," said Mike Lee, the assistant chief with the Harris County Sheriff's Office. "At that time, our deputies opened fire, multiple times, striking the suspect."

The suspect was taken to Kingwood Hospital, where he later died.

ABC13 asked the sheriff's office why Humphrey was out on the streets, and not behind bars, for his open felony arrest warrants.

A spokesperson told ABC13 they receive thousands of arrest warrants and it would be impossible to pick up each suspect on their charges. The sheriff's office said that based on the severity of Humphrey's charges, they were considered to-be warrants, which means he would only be arrested for the warrants if he was pulled over or came into contact with police.

We are told he was not on their radar until he became a suspect in the deadly Cracker Barrel shooting.

Meanwhile, as the family of Baucom continues grieving their loved one, they told ABC13 that this could've been avoided.

"She was a pistol," her brother, Billy said. "She loved people, her job, her family."

Baucom was 59-years-old and her family hopes she is remembered as a hero, who lost her life trying to protect her employees.