"That is what we want it to do."
KGO
By Luz Pena 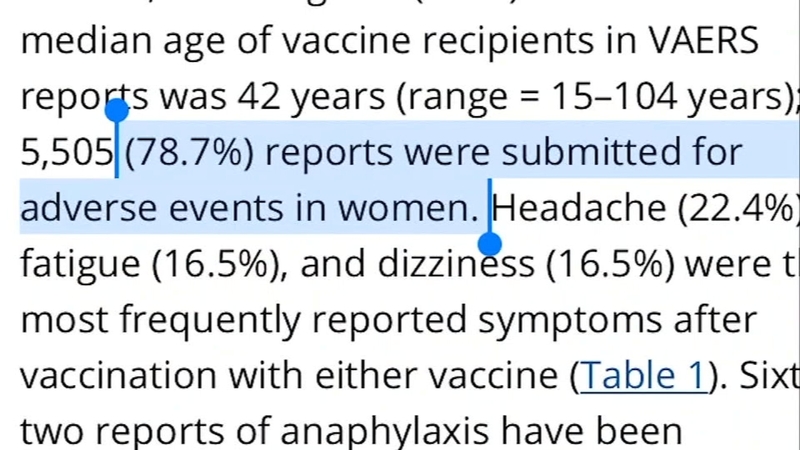 Why women, younger people have more vaccine side effects

SAN FRANCISCO -- For 24 hours these were the side effects Irma Duran went through after her second Pfizer shot.

"I had my shot at 10:30 in the morning and then at midnight that's when I woke up. I had a high fever and my bones... It felt like sand paper. Like someone was sanding my bones," said Duran.

A University of California San Francisco expert says these side effects after the second COVID-19 shot are normal because the immune response to the second shot is stronger.

"It's the spike protein that the mRNA is tricking the cells intro producing. That is what is being detected. That is what we want it to do. This is all good stuff," said George Rutherford, UCSF's Professor, and Epidemiology & Biostatistics.

In this CDC report, data shows that out of 13.7 million Americans vaccinated during December and January of 2021 side effects were higher among women.

"78.7% reports were submitted for adverse events in women. Headache (22.4%), fatigue (16.5%), and dizziness (16.5%) were the most frequently reported symptoms after vaccination with either vaccine. Sixty-two reports of anaphylaxis have been confirmed, 46 (74.2%) after receipt of the Pfizer-BioNTech vaccine and 16 (25.8%) after receipt of the Moderna vaccine."

Luz Pena: "Why it is that women and young adults are having more reactions to the second shot of the Moderna or the Pfizer vaccine?"

Dr. Rutherford: "Women should have stronger immune responses because they have to protect pregnancies. They have to live to have babies. So, it probably has to do with sex hormones. I can't tell you the exact biochemical mechanism but it makes perfect sense when you think about it in that larger context," and added, "We also know that the immune system ages and collects problems as you get older but it's not at all surprising to me that the reactions are more common in younger people than older people."

Now let's be clear these side effects are mild and tend to last between two to three days. They are headaches, body aches, and fever in some cases.

Should people be concerned if they don't have side effects to either of the vaccines?

"No. There is nothing wrong with them. They just have a better regulated immune system that can get them through this without causing a lot of unnecessary symptoms. If you don't feel these symptoms there is no reason for you to go get an antibody test," said Dr. Rutherford.

San Francisco resident, Alejandro Galicia, 34, felt the side effects of the first Moderna shot. He was hospitalized a year ago with COVID-19 and was given a 50% chance of survival. He puts the body aches after his first shot in perspective.

"Mentally, it brings you back to having a fever and it's just sort of psychological, but then you tell yourself it's nothing compared to COVID," said Galicia Diaz.
Report a correction or typo
Related topics:
health & fitnessvaccinescoronavirus californiacovid 19 vaccineucsfreopening california
Copyright © 2021 KGO-TV. All Rights Reserved.
COVID-19 VACCINE
Biden launching winter COVID booster, testing campaign
Omicron variant discovered in at least 7 US states
Study suggests past COVID infection may not fend off omicron
Antonio Brown allegedly asked chef to obtain fake COVID vaccine card
TOP STORIES
Money in Lakewood Church wall may be tied to 2014 theft, HPD says
Parents of alleged MI school shooter arrested, authorities say
Pasadena PD searching for suspect who stole Boy Scout trailer
Family of Navy vet shot to death on N. Fwy searching for answers
Watch 'ShopLocalish: Holiday Deals and Steals' with Tory Johnson
First, it was catalytic converters, but thieves moving to this part
Record highs possible Saturday, and Sunday will be steamy too
Show More
UH could turn national title picture upside-down if it beats Cincy
Mark Cuban buys entire Texas town, but what will he do with it?
How new TX law could impact topics educators can discuss in classroom
Omicron variant discovered in at least 7 US states
Student faces charge after pulling gun on classmate, Aldine ISD says
More TOP STORIES News