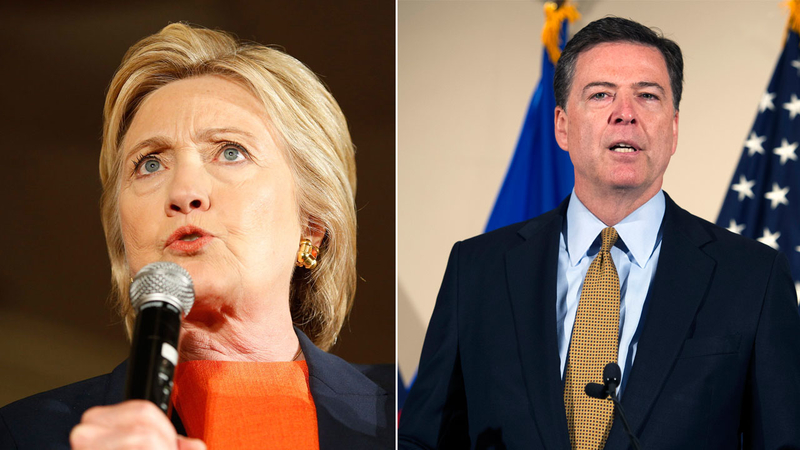 WASHINGTON -- The FBI won't recommend criminal charges against Hillary Clinton for her use of a private email server while secretary of state, agency Director James Comey said Tuesday, lifting a major legal threat to her presidential campaign. But Comey called her actions "extremely careless" and faulted the agency she led for a lackadaisical approach to handling classified material.

Comey's decision almost certainly brings the legal part of the issue to a close and removes the threat of criminal charges. Attorney General Loretta Lynch said last week that she would accept the recommendations of the FBI director and of career prosecutors.

"No charges are appropriate in this case," Comey said in making his announcement.

But Comey made that statement after he delivered a blistering review of Clinton's actions, saying the FBI found that 110 emails were sent or received on Clinton's server containing classified information. He added it was possible that people hostile to the U.S. had gained access to her personal email account.

Comey contradicted Clinton's past explanations in the case that she had turned over all of her emails and that she had never sent or received any emails that were classified at the time. The FBI chief said that in the course of the investigation, 110 emails in 52 email chains were determined to contain classified information at the time they were sent or received. He also found that "several thousand work-related emails" were not among the group of 30,000 emails Clinton turned over in 2014.

Yet after criticizing Clinton, her aides and the department for their actions, he said that after looking at similar circumstances in past inquiries, the FBI believed that "no reasonable prosecutor would bring such a case."

Comey made the announcement just three days after the FBI interviewed Clinton in a final step of its yearlong investigation into the possible mishandling of classified information.

He said he shared the FBI's findings with no one else in the government before making his announcement, which came just hours before Clinton was to travel with President Barack Obama on Air Force One to campaign together for the first time this year.

The declaration from Comey is unlikely to wipe away many voters' concerns about Clinton's trustworthiness, especially since the FBI director so thoroughly criticized her actions before delivering his verdict.

"There is evidence to support a conclusion that any reasonable person in Secretary Clinton's position ... should have known that an unclassified system was no place" for sensitive conversations, Comey said.

Nor will the recommendation stop Republican presidential candidate Donald Trump, who has called for criminal charges, from continuing to make the server a campaign issue or suggesting Clinton was helped by a Democratic administration. After Comey's announcement, Trump tweeted, "The system is rigged ... Very very unfair! As usual, bad judgment."

House Speaker Paul Ryan of Wisconsin, a Republican, said the decision not to prosecute Clinton defied explanation, adding: "No one should be above the law."

Clinton campaign spokesman Brian Fallon said they were pleased with the decision but reiterated that it was a "mistake" for Clinton to use personal email.

Clinton's personal email server, which she relied on exclusively for government and personal business, has dogged her campaign since The Associated Press revealed its existence in March 2015.

She has repeatedly said that no email she sent or received was marked classified, but the Justice Department began investigating last summer following a referral from the inspectors general for the State Department and the intelligence community.

The scrutiny was compounded by a critical audit in May from the State Department's inspector general, the agency's internal watchdog, which said that Clinton and her team ignored clear warnings from department officials that her email setup violated federal standards and could leave sensitive material vulnerable to hackers. Clinton declined to talk to the inspector general, but the audit said that she had feared "the personal being accessible" if she used a government email account.

The Clinton campaign said agents interviewed her this past Saturday for three and one-half hours at FBI headquarters. Agents had earlier interviewed top Clinton aides including her former State Department chief of staff, Cheryl Mills, and Huma Abedin, a longtime aide who now is the vice chairwoman of Clinton's campaign.

The staff member who set up the server, Bryan Pagliano, was granted limited immunity from prosecution by the Justice Department last fall in exchange for his cooperation.

Lynch said Friday that she would accept whatever findings and recommendations were presented to her. Though she said she had already settled on that process, her statement came days after an impromptu meeting with Bill Clinton on her airplane in Phoenix that she acknowledged had led to questions about the neutrality of the investigation.
Related topics:
washington d.c.u.s. & worldpolitics
Copyright © 2022 by The Associated Press. All Rights Reserved.
TOP STORIES
Bodies found in back seat and trunk of burning vehicle in Liberty Co.
Manhunt for Pct. 5 corporal ambush suspect ends with arrest in Mexico
Attorney of man questioned in dad's death 'concerned about his mental'
Investigation underway in pregnant woman shooting
Search underway for suspect in Texas City double shooting
New Buffalo Speedway bridge opens over Brays Bayou
ABC13 sits down with 3 of 5 Democrats looking to unseat AG Ken Paxton
Show More
You could get paid to get your COVID vaccine or booster
Man who sold weapon to Colleyville synagogue standoff suspect charged
Will Clayton find love in Houston? The Bachelor announces watch party
Unhealthy habits are leading to immune diseases, researchers say
Kathryn Kates, 'Orange is the New Black' actress, dead at 73
More TOP STORIES News