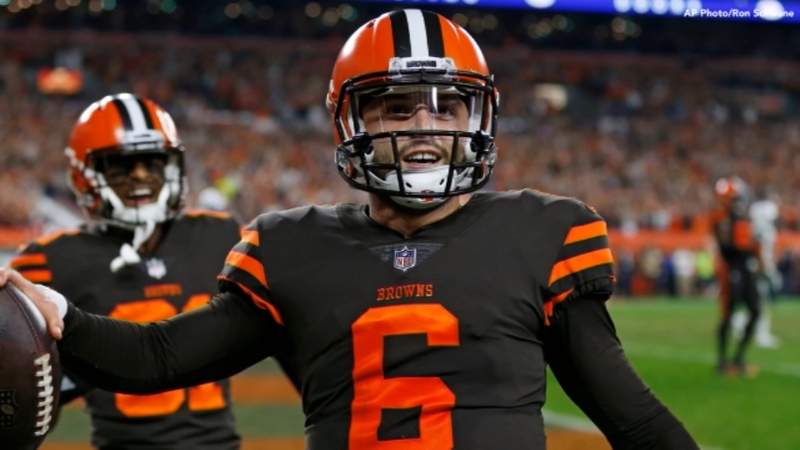 Browns gets 1st win since 2016, use 'Philly Special' play

CLEVELAND, Ohio -- For the first time in 635 days, the Cleveland Browns won.

Baker Mayfield showed them how, even using a trick play resembling the Philadelphia Eagles' 'Philly Special' from Super Bowl LII.

The No. 1 overall pick replaced injured starter Tyrod Taylor and sparked the Browns to their first win since Dec. 24, 2016.

"I've just been waiting for my moment," Mayfield said. "I'm just getting started."

And so ends Cleveland's 19-game winless streak, the NFL's second-longest since the 1970 AFL-NFL merger.

The Browns (1-1-1) trailed 14-0 in the first half before Mayfield came in for Taylor and led four scoring drives while winning an unexpected matchup against Jets rookie quarterback Sam Darnold. Cleveland passed on taking Darnold in the draft and instead chose Mayfield, the Heisman Trophy winner from Oklahoma.

Mayfield finished 17 of 23 for 201 yards in a little more than a half after coming in after Taylor suffered a concussion.

Darnold had one last chance, but was intercepted by Terrence Mitchell with 11 seconds left.

When the final seconds ticked off the clock, Cleveland fans, who had endured a 0-16 season and waited nearly two years to see their Browns win, erupted in celebration.

Refrigerators around the city stocked with Bud Lights were finally unlocked, and there figured to be more than a few beverages consumed in the hours ahead.

Cleveland, the @Browns won. The fridges are open. Go celebrate with a Bud Light. You’ve earned it. pic.twitter.com/RvjJ0WvpyO

This was just one win, and while it was an ending, it also felt like a beginning - because of Mayfield.