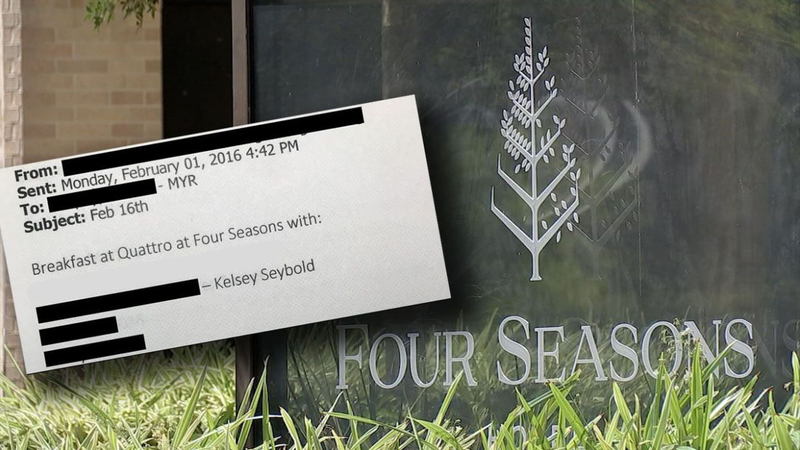 HOUSTON, Texas (KTRK) -- Houston's Four Seasons hotel has a pretty pricey breakfast, but the big money on February 16, 2016, had nothing to do with the $19 egg breakfast. Emails from Houston City Hall show Mayor Sylvester Turner was at the Four Seasons that morning with the then-CEO of Kelsey-Seybold, the health clinic's marketing director and their city lobbyist for a breakfast meeting at 8 in the morning.

By 9 a.m., the meeting was over and an email from the lobbyist to the mayor's secretary says it "went very well."

Your Turn: 13 Investigates makes it easy to find out who's funding 2019 mayoral election: click here to see the database of contributions to the 2019 mayoral race

The day went well for the Mayor's campaign, too. City records show on that very day the mayor's campaign reported $81,350 in donations from more than 120 Kelsey-Seybold doctors and executives. The campaign could've received the checks anytime between when Turner was sworn in and when he ate with the Kelsey team. When 13 Investigates looked the donor's names up in city databases, we found 87 percent of them had never given to a city political candidate ever before.

Michael Wynne, a former Assistant U.S. Attorney described the donations as "very, very unusual." Wynne is a former federal prosecutor who handled cases dealing with campaign donations. He now works to defend people accused of breaking those laws. He's not supporting anyone in Houston's mayoral race.

After reviewing the donations, Wynne told 13 Investigates, "In this instance, the number of people who had never been involved in the political circus whatsoever, all of a sudden decide to get involved. I think it's something that demands a little more scrutiny."

13 Investigates sent letters to nearly 100 of the Kelsey-Seybold doctors and executives, but that didn't yield answers about why so many decided to give. Follow up calls to 15 of them and the former CEO didn't either. Four of them flat out hung up on us; others said they couldn't remember details.

When we turned to Kelsey-Seybold, its spokesperson said the company wanted to respect their employees' privacy regarding personal donations but told us, "In 2016, a number of Kelsey-Seybold employees made personal contributions to the newly elected Mayor's campaign. Our employees have the right to donate their personal funds to a candidate, charity, or cause of their choice. I cannot speak to the process regarding how the campaign staff documents or reports donations."

It's more than just 120 checks - it's the timing. On the morning of that Four Seasons breakfast, Mayor Turner was just six weeks into his job. He wasn't running again for more than three years, but the city did have a decision to make about its employee health care contract. The city used CIGNA - and CIGNA used Kelsey Seybold as a provider for many city employees. Cigna's Houston market executive called Kelsey "a major partner" in one of the city emails obtained by 13 Investigates.

Explore the key events on our investigative trail. On the interactive below, click on the numbered headlines along the left side to see details.
On mobile device? Click here for a full screen experience.


At some point in the mayor's first term, the city had to either ask health insurance companies nationwide to bid on Houston's insurance plan or extend the current contract without bids.

In May 2016, a few months after the Four Seasons breakfast, the city's human resources director wrote in an email obtained by 13 Investigates that she was "working on information to present to the administration as to how 'he' would like for us to proceed." The mayor's office later confirmed on her behalf the "he" was Mayor Turner.

Ultimately, the city decided to extend the Cigna contract on July 28, 2016, without the city asking anyone else to compete. Houston didn't just extend the no-bid big dollar deal for one year, but for two. City records show it extended the contract for two years to lock in premiums and Cigna's commitment to try and cut costs.

The mayor's current political opponents think the timing of the donations and the deal stink. Bill King told us, "I just don't believe in those kinds of coincidences."

Tony Buzbee added, "I think anybody just looks at those basic facts, it raises really serious questions. Did we get the best deal? Did we, are we going to be paying the best premiums? When business is done like that, I think the city loses."

Looking over the list of donations, King told us, "You've got this extraordinary event of 128 people ... deciding to get, make these, really, an unusually large contribution in the aggregate and then it just happens to be months before the contracts renewed."

As for any connection with that breakfast months earlier or the donations from Kelsey Seybold employees reported on the same day and the contract, the mayor's campaign and city office says there is none. A campaign spokesperson told 13 Investigates "Kelsey Seybold would likely have worked with any carrier chosen by the city. Mayor Turner takes campaign finance laws seriously and follows both the letter and the spirit of the law. The suggestion that there is any cause and effect between campaign donations and city contracts is completely untrue - it is part of a false narrative driven by political candidates to gain an advantage in their campaigns."

In addition to the employee donations to Mayor Turner's campaign, records show Kelsey-Seybold gave a $50,000 donation that went to Turner's inaugural celebration weeks before the breakfast. The mayor's re-election campaign also reported a $5,000 donation from Kelsey two months after the Cigna contract was extended.